Is This George Herbert’s Worst Poem? “The British Church” 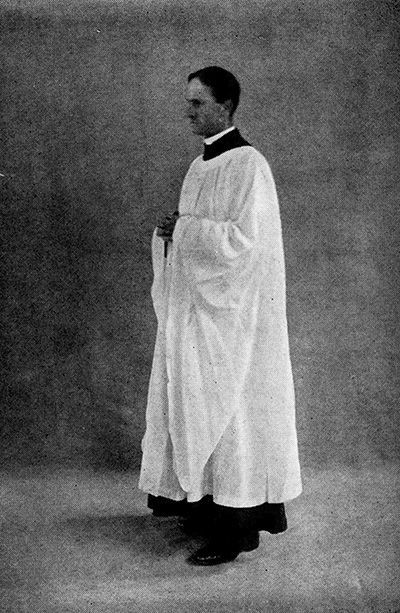 An  Anglican priest in choir habit, with a black cassock and a full white surplice. I dress like this when officiating at Morning Prayer or Evening Prayer. I also wear a black scarf or tippet, and an academic hood.

Is this George Herbert’s worst poem?

Whether it is a good poem or not, it is a good statement about his approach to the via media which Anglican tradition supposedly drives between Catholicism and Calvinism.

I joy, dear mother, when I view
Thy perfect lineaments, and hue
Both sweet and bright.
Beauty in thee takes up her place,
And dates her letters from thy face,
When she doth write.

A fine aspect in fit array,
Neither too mean nor yet too gay,
Shows who is best.
Outlandish looks may not compare,
For all they either painted are,
Or else undress’d.

She on the hills which wantonly
Allureth all, in hope to be
By her preferr’d,
Hath kiss’d so long her painted shrines,
That ev’n her face by kissing shines,
For her reward.

She in the valley is so shy
Of dressing, that her hair doth lie
About her ears;
While she avoids her neighbour’s pride,
She wholly goes on th’ other side,
And nothing wears.

But, dearest mother, what those miss,
The mean, thy praise and glory is
And long may be.
Blessed be God, whose love it was
To double-moat thee with his grace,
And none but thee. 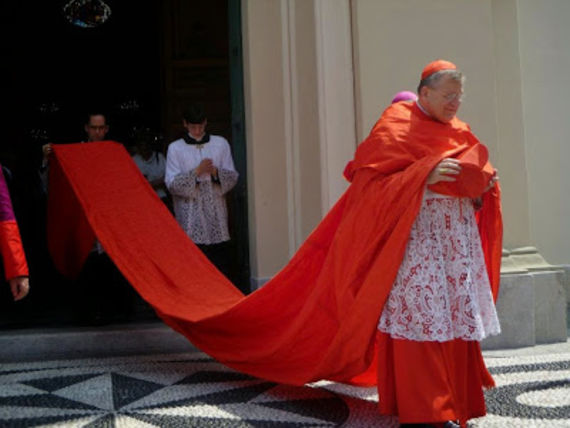 The American Cardinal Raymond Burke. These are not Anglican vestments.

The poet plays with the idea of “Church: as a woman. In Greek εκκλησια is feminine in gender, and is often called “the Bride of Christ” and “Mother Church” (given that it is also called “the Body of Christ” this raises issues of gender-blurring and identity, but that can be ignored right now – it’s a metaphor!). Herbert describes three Churches: 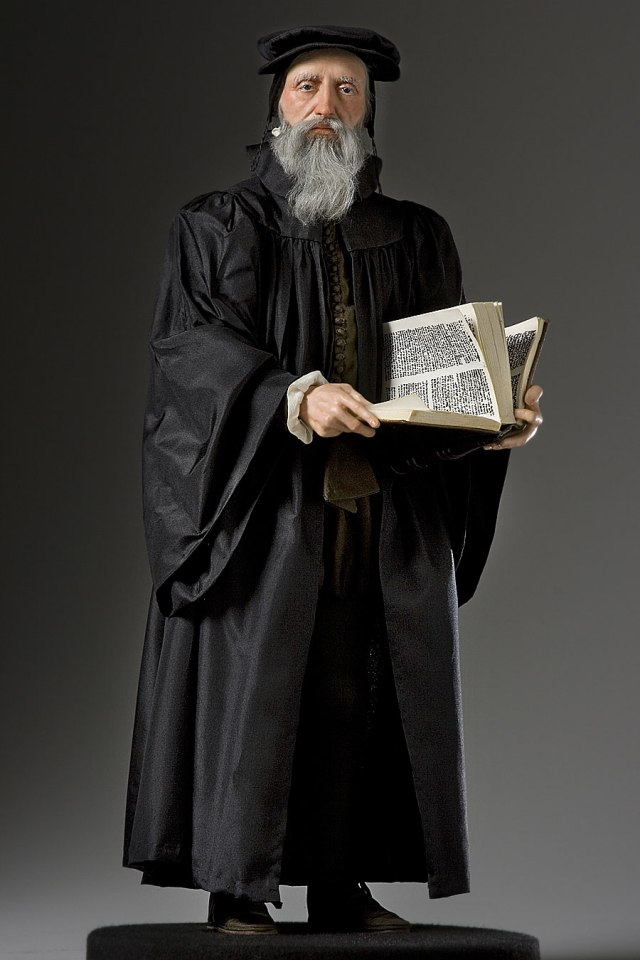 A model of John Calvin in his “Geneva gown.” Calvin was never ordained as such, but trained and worked as a lawyer in France. When he took up theology he continued to wear his old habit, and this became the model for the Geneva Gown – a plain black robe, rooted in the academic robes of university students and professors.

Herbert celebrates “the mean”, the middle way of the Church of England. Some of this may be due to the theological approach of Richard Hooker (1554-1600). Hooker opposed Puritanism, which advocated a theology that was essentially Calvinist; he also attacked Catholicism, suggesting that it had been corrupted over time. While he did not use the term via media later Anglican authors felt that he enunciated the themes associated with that, balancing tradition and scripture by the use of reason.

Would Herbert have been a Brexiteer? Perhaps. His reference to a “double-moat” — 1) the grace of God, which meant that is was separated from the extremes of Catholicism and Calvinism, and 2) the actual physical moat of being an island — suggests that he had no great love for the Continent.

Part of the reason I am an Anglican is because the denomination that began in the Church of England combines some of the best of the two other traditions. When I was in my early twenties I was attracted to the Puritan’s heirs, evangelicalism, because of their great love and reverence for scripture, and their evident passion for proclaiming the gospel. At the same time I was attracted to Catholicism, with its deep understanding of spirituality and investment in critical learning at universities and colleges. In the end I could not become an evangelical of any stripe because I felt that their approach to scripture was lacking in any historical or critical analysis, and thus it picked and chose  the passages in scripture that it felt were relevant and ignored the rest; ironically, they did not trust scripture to speak for itself, but bound it in 16th century theology. Likewise I could not become a Catholic because of the totalizing nature of the magisterium and the patriarchy and hypocrisy I saw in the hierarchy. So I stayed an Anglican, a tradition that was rooted in tradition but critical of it and always reforming itself. I do not have the soppy sentimentalism about the church which Herbert displays, but I find myself aligned with what he calls “the mean”.

Canadian. Husband. Father. Christian. Recovering Settler. A priest of the Church of England, Diocese in Europe, on the island of Crete in Greece. More about me at https://www.linkedin.com/in/bruce-bryant-scott-4205501a/
View all posts by Bruce Bryant-Scott →
This entry was posted in Lent, Poetry and Novels and tagged "The British Church", George Herbert. Bookmark the permalink.

1 Response to Is This George Herbert’s Worst Poem? “The British Church”