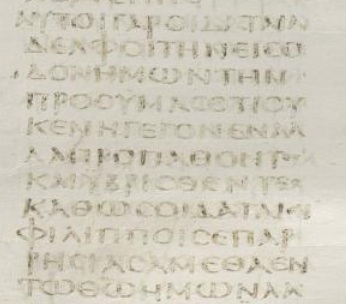 The second reading is from Paul’s First Letter to the Thessalonians. Thessaloniki (as it is now properly written) is a city in the north of Greece in what was historic Macedon (from when Alexander the Great came). Colloquially it is known as Salonica, and it is now Greece’s second largest city. There are two letters in the New Testament written to the church in Thessalonica, but it is not clear which is older; as is typical in the Epistles, the letters are arranged according to length, not chronology. My Paul professor at Trinity, the Rev. Professor John C. Hurd, believed that the Second Letter was the earlier and the First was later. Both are considered to be early writings by Paul, if not the earliest, mainly because of the emphasis upon eschatology in both of them.

1 Th. 1.9-10 gives us the background we need to understand the relationship of Paul with the church of the Thessalonians: “For the people of those regions report about us what kind of welcome we had among you, and how you turned to God from idols, to serve a living and true God, and to wait for his Son from heaven, whom he raised from the dead—Jesus, who rescues us from the wrath that is coming.” The Thessalonians appear to have been non Jews and pagans, worshiping whatever deities were worshiped in that region. Paul came upon them, preached to them the good news of Jesus, and they responded favourably. Paul in time left them, but is receiving reports about them. They are being persecuted in some ways, and so Paul is writing to encourage them.

Paul believed that the Day of the Lord was imminent, but somewhat postponed. The purpose of the postponement was so that the people of Israel might prepare themselves and turn to God, and so that an extension of God’s promises might be proclaimed to non-Jews, to Gentiles. Paul believed that he had been called to proclaim this exceptional extension to the Gentiles, and was racing against time to get that good news out to as many people as he could. He believed that otherwise all the idol-worshipers were condemned, for he thought that idol worshiping warped the human soul and led to grave sins. As much idolatry was tied up with the cult of the emperor, he also believed that the whole Roman regime itself was corrupted by evil powers and principalities. His was a rescue mission, and he felt the press of time.

Paul contrasts the characteristics of Christian mission with those of the corrupt pagan society:
Paul comes with “courage”, is “pleasing to God”, “gentle”, “tenderly caring”, “sharing”, has “pure, upright, and blameless conduct”, and “urges and encourages and pleads;  he does NOT come with “deceit, impure motives, trickery”, is NOT “pleasing to mortals”, does NOT come “words of flattery or a pretext for greed”, does NOT “seek praise from mortals”, and is NOT a “burden”.
Western society is so formed by these Christian characteristics that we assume that these are normal and that all would deprecate the second set characteristics, but not so. Reading through the classical epics such as The Iliad or The Odyssey I find the latter set of characteristics well entrenched and re-framed as virtues. Given the trend of politics in the world one might conclude that this set of “virtues” is also in the ascendant today, and that gentleness, sharing, and truth telling is weak and naive.

As a Christian I choose what looks weak and foolish to the world to be my strength. In the long run such a course overcomes the apparently strong and wise, the arrogant and oppressive. May God bless you on this Third Day of Advent.

Isaiah 1.21–31
How the faithful city
has become a whore!
She that was full of justice,
righteousness lodged in her—
but now murderers!
Your silver has become dross,
your wine is mixed with water.
Your princes are rebels
and companions of thieves.
Everyone loves a bribe
and runs after gifts.
They do not defend the orphan,
and the widow’s cause does not come before them.

Therefore says the Sovereign, the Lord of hosts, the Mighty One of Israel:
Ah, I will pour out my wrath on my enemies,
and avenge myself on my foes!
I will turn my hand against you;
I will smelt away your dross as with lye
and remove all your alloy.
And I will restore your judges as at the first,
and your counsellors as at the beginning.
Afterwards you shall be called the city of righteousness,
the faithful city.

Zion shall be redeemed by justice,
and those in her who repent, by righteousness.
But rebels and sinners shall be destroyed together,
and those who forsake the Lord shall be consumed.
For you shall be ashamed of the oaks
in which you delighted;
and you shall blush for the gardens
that you have chosen.
For you shall be like an oak
whose leaf withers,
and like a garden without water.
The strong shall become like tinder,
and their work like a spark;
they and their work shall burn together,
with no one to quench them.

1 Thessalonians 2.1–12
You yourselves know, brothers and sisters, that our coming to you was not in vain, but though we had already suffered and been shamefully maltreated at Philippi, as you know, we had courage in our God to declare to you the gospel of God in spite of great opposition. For our appeal does not spring from deceit or impure motives or trickery, but just as we have been approved by God to be entrusted with the message of the gospel, even so we speak, not to please mortals, but to please God who tests our hearts. As you know and as God is our witness, we never came with words of flattery or with a pretext for greed; nor did we seek praise from mortals, whether from you or from others, though we might have made demands as apostles of Christ. But we were gentle among you, like a nurse tenderly caring for her own children. So deeply do we care for you that we are determined to share with you not only the gospel of God but also our own selves, because you have become very dear to us.
You remember our labour and toil, brothers and sisters; we worked night and day, so that we might not burden any of you while we proclaimed to you the gospel of God. You are witnesses, and God also, how pure, upright, and blameless our conduct was towards you believers. As you know, we dealt with each one of you like a father with his children, urging and encouraging you and pleading that you should lead a life worthy of God, who calls you into his own kingdom and glory.

Luke 20.9–18
He began to tell the people this parable: ‘A man planted a vineyard, and leased it to tenants, and went to another country for a long time. When the season came, he sent a slave to the tenants in order that they might give him his share of the produce of the vineyard; but the tenants beat him and sent him away empty-handed. Next he sent another slave; that one also they beat and insulted and sent away empty-handed. And he sent yet a third; this one also they wounded and threw out. Then the owner of the vineyard said, “What shall I do? I will send my beloved son; perhaps they will respect him.” But when the tenants saw him, they discussed it among themselves and said, “This is the heir; let us kill him so that the inheritance may be ours.” So they threw him out of the vineyard and killed him. What then will the owner of the vineyard do to them? He will come and destroy those tenants and give the vineyard to others.’ When they heard this, they said, ‘Heaven forbid!’ But he looked at them and said, ‘What then does this text mean:
“The stone that the builders rejected
has become the cornerstone”?
Everyone who falls on that stone will be broken to pieces; and it will crush anyone on whom it falls.’

Canadian. Husband. Father. Christian. Recovering Settler. A priest of the Church of England, Diocese in Europe, on the island of Crete in Greece. More about me at https://www.linkedin.com/in/bruce-bryant-scott-4205501a/
View all posts by Bruce Bryant-Scott →
This entry was posted in Advent. Bookmark the permalink.