Day Two of An Advent Calendar 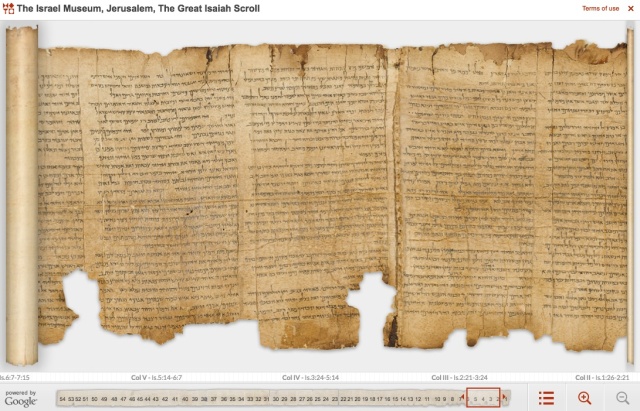 The Great Isaiah Scroll discovered at Qumran in 1947. Created c. 125 BC. From http://dss.collections.imj.org.il/isaiah#5:7

Isaiah, as Thomas Merton once said, is the prophet of Advent. So who is he? What are the texts speaking to?

The Book of the Prophet Isaiah is a large text, sixty-six chapters long. Most of it is poetry, and not all of it is clear on first reading, especially if one is not aware of the historical contexts to which the texts speak. It appears to be a composite text. The obvious break points are at Chapter 36 and chapter 40; chapters 36 to 39 are narrative prose and are copied out of the Second Book of Kings. Scholars call the section before chapter 40 “First Isaiah” and the section after “Second Isaiah” because they appear to have been composed at different times. First Isaiah speaks to the circumstances of the Kingdom of Judah in the 8th and 7th century BC, whereas Second Isaiah speaks to a situation around the late 6th century, when the Judeans had been defeated by the Neo-Babylonian Empire, taken into exile to the waters and canals of the Tigris and Euphrates in what is now Iraq, and then the Babylonians were conquered by the Persians. Whereas First Isaiah is full of dire warnings and call to repentance, Second Isaiah is filled with messages of comfort and encouragement.

There may well be further sub-dvisions. Chapters 60-66 are sometimes described as “Third Isaiah”, and some scholars see it coming from an even later time, when the Judeans have returned to Jerusalem, the Temple has been rebuilt, but the Kingdom of God has not returned. It is more apocalyptic in tone, looking for an intervention from God in a dramatic earth-transforming way. Within First Isaiah Chapter One seems to be a long introduction of themes, and Chapters Two through Twelve then is a majestic unfolding of those themes. The call of Isaiah himself is described in Chapter 6, and the text of 7-8 is mostly prose and in the first person discussing the interactions of Isaiah and KIng Ahaz. One of my old professors suggested that the historical core prophecy of the actual man Isaiah is in Chapter 1 through 12, although it may continue beyond that.

A prophet, as the Greek word suggests, is “one who speaks on behalf” of another. The prophet usually speaks on behalf of God to rulers and the people, but may also speak on behalf of the ruler and people to God. A prophet is an intermediary who warns and speaks truth to power. Prophets in the Hebrew Scriptures usually have followers, and it is thought that some of them were literate and would have written down what they heard. These texts were then sifted, organized, and circulated. The author of Second Isaiah would have lived many generations after the historical Isaiah, but the older texts inspired them to write, or there was an actual transmission of discipleship from the older followers to the new. Because of the interpolation of 36-39 from Second Kings the final editing probably took place in the 4th or 3rd century BC. The many fragments of Isaiah (one being a complete book) that were found in the Dead Sea Scrolls (manuscripts written c. 150 BC – 60 AD) were essentially the same as the texts that we already had, so the text had stabilized well before that time.

The passage for today challenges the rulers and priests of Jerusalem and Judea. Apparently the liturgical and sacrificial schedule was being kept, but the weightier matter of justice was being ignored. So the prophet blasts them, and says: “learn to do good; seek justice, rescue the oppressed, defend the orphan, plead for the widow”. The call for fairness and justice resonates to this day, and is a challenge to all who seek to rule in the government, and those who presume to speak to God.

God be with you on this Second Day of Advent.

Isaiah 1.10–20
Hear the word of the Lord,
you rulers of Sodom!
Listen to the teaching of our God,
you people of Gomorrah!
What to me is the multitude of your sacrifices?
says the Lord;
I have had enough of burnt-offerings of rams
and the fat of fed beasts;
I do not delight in the blood of bulls,
or of lambs, or of goats.

When you come to appear before me,
who asked this from your hand?
Trample my courts no more;
bringing offerings is futile;
incense is an abomination to me.
New moon and sabbath and calling of convocation—
I cannot endure solemn assemblies with iniquity.
Your new moons and your appointed festivals
my soul hates;
they have become a burden to me,
I am weary of bearing them.
When you stretch out your hands,
I will hide my eyes from you;
even though you make many prayers,
I will not listen;
your hands are full of blood.
Wash yourselves; make yourselves clean;
remove the evil of your doings
from before my eyes;
cease to do evil,
learn to do good;
seek justice,
rescue the oppressed,
defend the orphan,
plead for the widow.

Come now, let us argue it out,
says the Lord:
though your sins are like scarlet,
they shall be like snow;
though they are red like crimson,
they shall become like wool.
If you are willing and obedient,
you shall eat the good of the land;
but if you refuse and rebel,
you shall be devoured by the sword;
for the mouth of the Lord has spoken.

To the church of the Thessalonians in God the Father and the Lord Jesus Christ:
Grace to you and peace.

We always give thanks to God for all of you and mention you in our prayers, constantly remembering before our God and Father your work of faith and labour of love and steadfastness of hope in our Lord Jesus Christ. For we know, brothers and sisters beloved by God, that he has chosen you, because our message of the gospel came to you not in word only, but also in power and in the Holy Spirit and with full conviction; just as you know what kind of people we proved to be among you for your sake. And you became imitators of us and of the Lord, for in spite of persecution you received the word with joy inspired by the Holy Spirit, so that you became an example to all the believers in Macedonia and in Achaia. For the word of the Lord has sounded forth from you not only in Macedonia and Achaia, but in every place where your faith in God has become known, so that we have no need to speak about it. For the people of those regions report about us what kind of welcome we had among you, and how you turned to God from idols, to serve a living and true God, and to wait for his Son from heaven, whom he raised from the dead—Jesus, who rescues us from the wrath that is coming.

Luke 20.1–8
One day, as he was teaching the people in the temple and telling the good news, the chief priests and the scribes came with the elders and said to him, ‘Tell us, by what authority are you doing these things? Who is it who gave you this authority?’ He answered them, ‘I will also ask you a question, and you tell me: Did the baptism of John come from heaven, or was it of human origin?’ They discussed it with one another, saying, ‘If we say, “From heaven”, he will say, “Why did you not believe him?” But if we say, “Of human origin”, all the people will stone us; for they are convinced that John was a prophet.’ So they answered that they did not know where it came from. Then Jesus said to them, ‘Neither will I tell you by what authority I am doing these things.’

Canadian. Husband. Father. Christian. Recovering Settler. A priest of the Church of England, Diocese in Europe, on the island of Crete in Greece. More about me at https://www.linkedin.com/in/bruce-bryant-scott-4205501a/
View all posts by Bruce Bryant-Scott →
This entry was posted in Advent and tagged Advent, Bible, Isaiah. Bookmark the permalink.