A sermon preached (in a different form) on
The Seventh Sunday of Easter, May 24, 2020 11:00 am
at The Anglican Church of St. Thomas the Apostle, Kefalas, Crete
in the Year of the Great Pandemic

“But you will receive power when the Holy Spirit has come upon you; and you will be my witnesses in Jerusalem, in all Judea and Samaria, and to the ends of the earth.” Acts 1.8

The Ends of the Earth

“The ends of the Earth.” For me this phrase brings the memory of my first flight west, around 1986, from Toronto to Vancouver. I had made many flights eastwards, to the United Kingdom, and a few south, but never west. It was a longish trip, some five hours, and we chased the sun as we flew over the rocks and trees and lakes of Northern Ontario, the flat fields of the Prairies, and then the astonishing ranges of mountains between Alberta and the Pacific Coast. Just as we came into Vancouver, I had the sudden sensation that we were flying off the edge of the world, that beyond us was nothing but the yawning expanse of the Pacific, so much larger than the Atlantic. We actually flew out past the edge of the mainland to turn and land at the airport, which is right on the ocean. I never quite shook the idea that I was on the edge of things.

(Of course, I did eventually discover that there were islands beyond Vancouver and the Lower Mainland of the province – the Gulf Islands, where we lived for ten years, and Vancouver Island and its capital city of Victoria, where we lived another fourteen.) 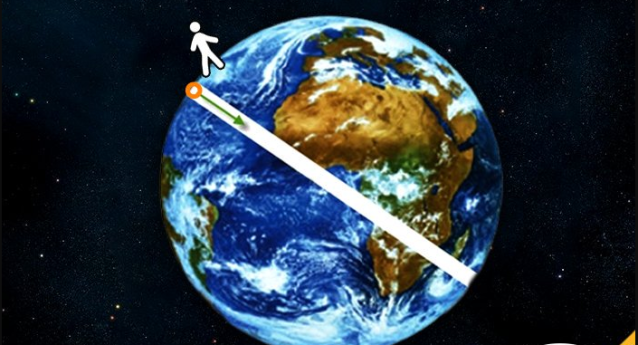 Well, as we all know, there are no ends of the earth; that suggests the earth is flat, and it isn’t. But there are antipodes – places that are opposite to each other on the globe; by definition they are two points as far away from each other as can be and yet still be on the planet.  Any guess as to where the antipodes of Jerusalem is?

The antipodes of Jerusalem is in the south west Pacific, near an island called Rurutu, in French Polynesia. The village closest to the place in the ocean that is exactly opposite Jerusalem is called Moeri. And you know what – it has a church, built towards the end of the 19th century. So, in a real sense, the good news has been preached to the ends of the earth. So we’re done, right?

Members of the Church of Ruruto on the day when “tithes” are traditionally paid. The island of Ruruto is the piece of land closest to the spot on Earth that is the farthest away from Jerusalem.

In every generation we must have new witnesses. No one is “born” Christian; Christians are grown, whether by being suddenly born from above by the Holy Spirit, or by a seed planted in one that slowly grows, or some combination of the two.

Many people believe that they have had all the religion they need, especially in the countries of Europe, Canada, and increasingly in North America.

And we all know these people. Or we have raised them, and despite our best efforts, our children seem to have a mind of their own. Or they grew up in the same house with us, or we fell in love and married them, or we worked with them, or go to the tavernas with them. Some of us are these people, and we are wondering why we are in the church. In general, they are good people. They are our friends, or family, our neighbours, and ourselves.

So, what does it mean to witness? The Greek word here is μάρτυρες – martyrs in a direct transliteration. Μαρτυρώ is still the ordinary verb for bearing witness to something, and a μαρτυράς is somebody in a courtroom who gives evidence. But we hear μαρτυράς and we think somebody has to die.

Francis S. Collins is the Director of the National Institutes of Health in the United States, and led the Human Genome Project. An avowed Christian, he recently won the Templeton Prize.

We bear witness in everything we do, how we do anything, everything we say, and how we say it. Inasmuch as we follow Christ, we witness to Jesus in our words and our deeds. And ultimately that witness is about how much Jesus is in our lives and we are formed by the Spirit. Jesus says,

All mine are yours, and yours are mine; and I have been glorified in them. And now I am no longer in the world, but they are in the world.

Jesus is glorified in us, and in the care we have for one another. As is said by the prophet Ezekiel,

“A new heart I will give you, and a new spirit I will put within you; and I will remove from your body the heart of stone and give you a heart of flesh. I will put my spirit within you . . .”

To go back to what I talked about last week, I want to be part of a church in which people knew their Bibles, would be comfortable in prayer, and knew how to share their faith in a transparent, non-threatening, and attractive way, over a cup of coffee, or in their actions.

Our proposed Vision Statement is that we “radiate God’s love in Jesus Christ, on this island, and beyond. May we continue to receive power, may the Holy Spirit come upon us; and we be Christ’s witnesses Kefalas, in Apokoronas and Crete, and to the ends of the earth.

Canadian. Husband. Father. Christian. Recovering Settler. A priest of the Church of England, Diocese in Europe, on the island of Crete in Greece. More about me at https://www.linkedin.com/in/bruce-bryant-scott-4205501a/
View all posts by Bruce Bryant-Scott →
This entry was posted in Easter, Sermons and tagged Jerusalem and Moeri, Seventh Sunday of Easter, Sunday after Ascension, The New Witnesses. Bookmark the permalink.