Posted on December 4, 2019 by Bruce Bryant-Scott

Day Four of “Through Advent with Isaiah”

While the full details of the internal structure of the Book of Isaiah is debated, the overall structure is relatively clear (to me, at least). And here it is, in the diagram above:

The first thirty-five chapters appear to speak to the time of the prophet Isaiah, and much of it may date back to his time, although some see additions here and there. I have subdivided it, following some of the insights I gained thirty-three years ago in a class at Knox College, Toronto with Prof. Stanley Walters.

1.1 The vision of Isaiah son of Amoz, which he saw concerning Judah and Jerusalem in the days of Uzziah, Jotham, Ahaz, and Hezekiah, kings of Judah.

2.1 The word that Isaiah son of Amoz saw concerning Judah and Jerusalem.

Walters argued that this was a means of marking off two sections. Chapter 1 serves as an introduction to the whole book.

Chapters 13 through 23 have titles scattered throughout, signifying Oracles, which are prophecies of doom against the nations. Thus we find

As well, there are oracles without titles against Assyria and others. Because these are all oracles to the nations that do not follow the God of the Hebrews, these seem to have been collected by some editor (either Isaiah, one of his disciples, or a later redactor).

There is no clear demarcation with this next section, chapters 24 to 35 – the oracles against the nations just seem to flow into general warnings of coming destruction, admonitions, and hopeful promises of restoration and redemption. Indeed, I find this to be the most confusing section of the whole book, at least in terms of its organization.

As mentioned yesterday, 36 to 39 is prose and is taken from II Kings, a book which received its final form long after the time of Isaiah. The extract does describe events in Isaiah’s life, though. Chapter 39 relates a visit by an official from what was then a minor city which had once been the capital of a great empire, but was now part of the Assyrian Empire – Babylon. After the time of Isaiah, Babylon revolted and established the Neo-Babylonian Empire, and eventually conquered Judah and Jerusalem. The story told here foreshadows the Babylonian Exile.

Comfort, O comfort my people,
says your God. Speak tenderly to Jerusalem,
and cry to herthat she has served her term,
that her penalty is paid,that she has received from the Lord’s hand
double for all her sins.

This is a collection of passages addressing the situation of the Babylonian Exiles, and is mostly full of hope. It also has what modern scholars have identified as the “Suffering Servant songs”, which I believe informed Jesus’s self-understanding of his mission; they were certainly used in the New Testament that way.

Many scholars do believe that chapters 56 to 66 forms yet another distinct collection from a later time after the return from exile. Paul D. Hanson of Harvard Divinity School (with whom I studied in 2002) described this section as “apocalyptic” and, reading it with Zechariah, developed a scenario in which these texts emerged. He suggests that the leaders of the returned exiles were divided, and that these chapters are by the disenfranchised.

So there is the structure of Isaiah – a roadmap, if you will.

The passage from Morning Prayer today is pretty typical of the kind of condemnation Isaiah comes up with:

5 On that day the Lord of hosts will be a garland of glory,
and a diadem of beauty, to the remnant of his people; 6 and a spirit of justice to the one who sits in judgement,
and strength to those who turn back the battle at the gate.

11 Truly, with stammering lip
and with alien tonguehe will speak to this people, 12   to whom he has said,‘This is rest;
give rest to the weary;and this is repose’;
yet they would not hear. 13 Therefore the word of the Lord will be to them,
‘Precept upon precept, precept upon precept,
line upon line, line upon line,
here a little, there a little’;in order that they may go, and fall backwards,
and be broken, and snared, and taken.                – Isaiah 28.1-13

Following our roadmap, we are between the Old Core and Oracles, and the prose from II Kings – which is to say we are in a bit of a spaghetti junction, and I’m not quite sure what is going on. 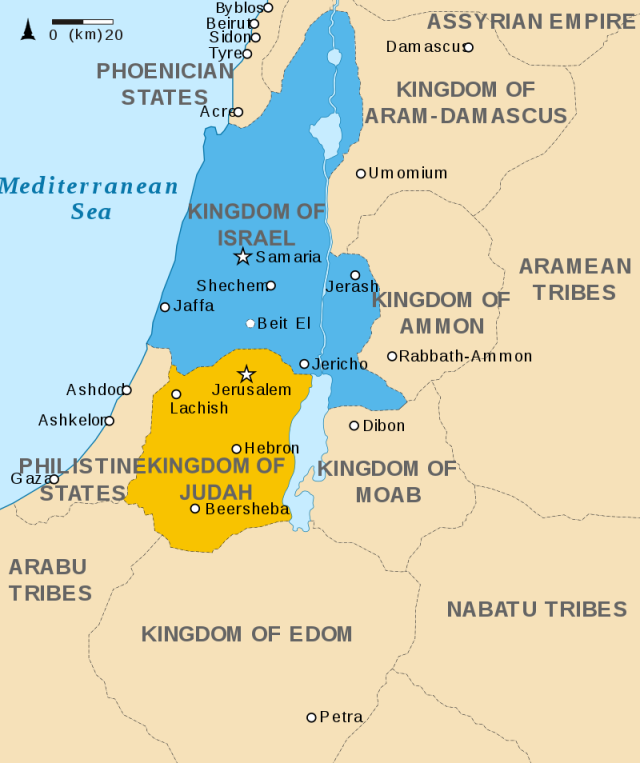 From Wikipedia; from here.

The prophet fulminates against Ephraim. Ephraim was the second son of Joseph, so a half-tribe of twelve tribes of Israel. In poetical works it usually is a reference to the northern Kingdom of Israel (c. 930 BCE – 720 BCE). It was founded when the ten tribes broke away from the House of David in Judah, and was was conquered by the Assyrians in 720 BCE. The city of Samaria was founded as its capital, in competition with Jerusalem. Much of its population was deported in 720 BCE, and exiles from other parts of the Assyrian Empire were settled in Samaria and the surrounding region.

Verses 7 and 8 are rather explicit, eh? Ephraim and its people are drunk and overfed, and not in a good way. This is the author’s way of describing how Israel – wealthy in comparison to Judah – satisfied itself with injustice and other gods. They are abandoning the Torah of Moses, and thus they do not hear God’s call to them.

Verses 5 and 6 sit uneasily here. Is it an interpolation of hope from a later author? Perhaps. If one reads the passage as applying to the whole people of Israel – both the northern Kingdom of Israel and the southern Davidic Kingdom of Judah – then the reference to the remnant begins to make sense in a time of exile. So condemnation and hope are mixed together.

Canadian. Husband. Father. Christian. Recovering Settler. A priest of the Church of England, Diocese in Europe, on the island of Crete in Greece. More about me at https://www.linkedin.com/in/bruce-bryant-scott-4205501a/
View all posts by Bruce Bryant-Scott →
This entry was posted in Advent, Isaiah and tagged Isaiah, Isaiah 28.1-13, Structure of Isaiah. Bookmark the permalink.