Sing This At My Funeral 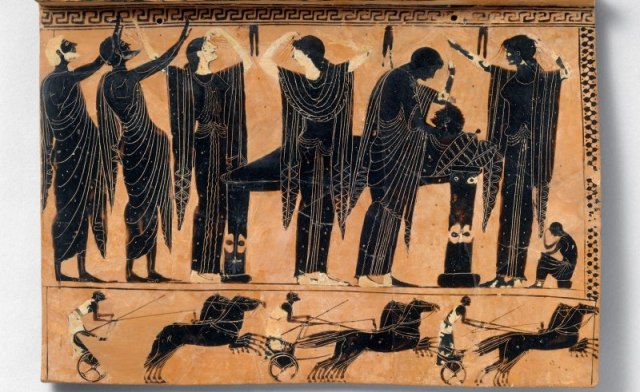 Ancient Greek professional mourners. We won’t need them at my funeral, because everyone will be genuinely wailing, right?

As a priest I encourage each of my parishioners to think about their own death, and to make plans accordingly. This includes what kind of service they want, what they want done with their burial, the music to be sung and who might preside and speak. I also encourage them to have wills, life insurance where appropriate, and these days, to have all their computer and application passwords written down and in one, secure place. It is a kindness to those who survive us to do such thinking.

When I was newly ordained I had two colleagues who were, unusually, both assistant curates at the the same parish. Few Canadian churches could afford one curate, let alone two, but this one did. As things played out, they fell in love, got married (and in due course, had a child). The rector was insistent that they each take their full vacation, but as he relied on them to cover for him when he was away, they could only take one week off together. One week, when the husband was on vacation, the wife in this scenario went looking for some material or book in her husband’s office at the church. While there she came across a brown manila envelope with, “In The Event of My Death” written on it. Being newly married and figuring people in love should have no secrets, and seeing that the envelope was not sealed, she opened it. Inside were six pages of single-spaced typed instructions on the funeral that her husband wanted, all in excruciating Anglo-Catholic detail. She told me about this at a Post-Ordination Training event that we were all at, and her husband was sitting beside her as she told me about this. “So, do you have your wills done, too?” I asked. “Umm, no . . . ”

Come, my Way, my Truth, my Life:
Such a Way, as gives us breath:
Such a Truth, as ends all strife:
Such a Life, as killeth death.

Come, my Light, my Feast, my Strength:
Such a Light, as shows a feast:
Such a Feast, as mends in length:
Such a Strength, as makes his guest.

Again, like yesterday’s poem, this is one of Herbert’s most popular poems that is sung, being found in 52 hymnals according to the excellent website hymnary.org. The inspiration is from the Gospel according to John, where Jesus says:

as well as the First Letter of John, where it is said,

Herbert plays with paradox in this poem, for Jesus is the way – the walk – in which one is not winded, but gains breath, He is the life that destroys death, when the infinite encounters the absolute limitation of the dead. He presents Jesus as the ideal – a truth that ends all dissension, a joy that no one can take away, a love from which no one can separate us, echoing Paul  his Letter to the Romans:

For I am convinced that neither death, nor life, nor angels, nor rulers, nor things present, nor things to come, nor powers, nor height, nor depth, nor anything else in all creation, will be able to separate us from the love of God in Christ Jesus our Lord. (8.38-39)

This poem is remarkable for a number of reasons. First, every word except “killeth” in line four is but one syllable long. This is simplicity! Second, the wealth of images in such a short space, where three are enunciated in the first line of each stanza and then each developed in compact line. In the second and third stanzas the images are related. In the second stanza the light discloses the feast, and the strength is given to the guest of the feast. In the final stanza the final line weaves joy, love, and heart into “a Heart, as joys in love.” Third, as Arnold Stein points out, the structure of the poem creates an internal rhyme between the third line and the fourth of each stanza: strife:Life, length:Strength, and part:Heart. Indeed, words are echoed all over the place, binding it together tightly. fourth, the inital line’s “Come” followed by three “Such”s creates a rhthymic expectation. Finally, the use of catalectic trochaic tetrameter propels the reader along to a conclusion seemingly a little faster than iambic pentameter might have. 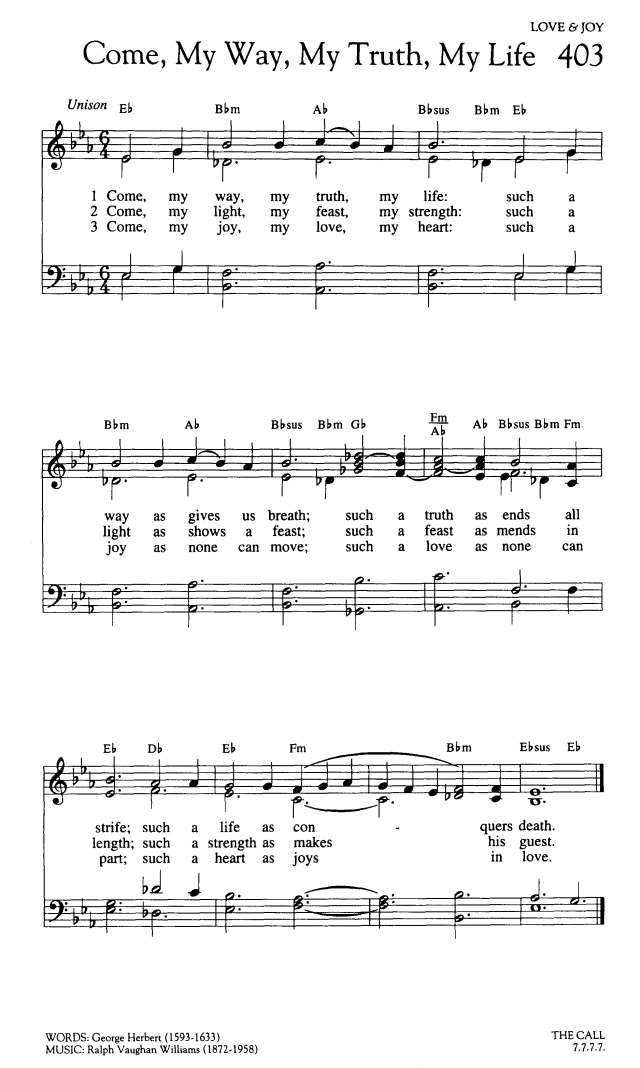 In his setting of the poem Vaughn Williams puts a half note (or two quarter notes) on the stress in each foot, ending each line with a dotted half note. This gives it a graceful waltzing feeling.  It ends with the third to last syllable in the last line of each stanza over eight quarter notes, suggesting some sort of drawing out or hesitation, and echoing plainsong, as if this dance is older than one might imagine.

Jesus is no where mentioned, nor is God. Herbert does not feel the need to name the deity, allowing the imagination to play with the relationship with God. Thus he is not restricted to using anthropomorphic images, but sees Jesus as a road, or a feast, and so forth. This is not allegory, then, but something more allusive and less rigid.

A title like “The Call” suggests that it might be about vocation – but it is not God calling us to follow Jesus, but the poet calling to God in Christ. Herbert affirms that human beings have a natural desire for God. Augustine of Hippo wrote in the first chapter of his Confessions, some twelve centuries before Herbert, “You have made us for yourself, and our hearts are restless until they rest in you. [cor nostrum inquietum est donec requiescat in Te]. Herbert undoubtedly had read Augustine, in the original Latin, and would have agreed with this passage.

I believe we sang this at my ordination. Along with Vaughn Williams’ setting of “O God, Our Help in Ages Past” and “A Spendthrift Lover is Our God” you can sing this at my funeral, please.

Canadian. Husband. Father. Christian. Recovering Settler. A priest of the Church of England, Diocese in Europe, on the island of Crete in Greece. More about me at https://www.linkedin.com/in/bruce-bryant-scott-4205501a/
View all posts by Bruce Bryant-Scott →
This entry was posted in Lent, Poetry and Novels and tagged Come My Way My Truth My Life, George Herbert, The Call. Bookmark the permalink.

2 Responses to Sing This At My Funeral