A Short One: “Anagram” 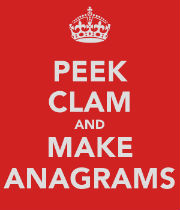 How well her name an Army doth present,
In whom the Lord of hosts did pitch his tent!

This is probably the shortest poem in The Temple, and does not get much commentary by the critics, with good reason. The form of the poem is so slight it is barely light poetry. Herbert seems to find meaning in the idea that the Lord of Hosts (a title of God from the Hebrew Bible) is conceived and born in someone whose name in English can be rearranged to spell Army. He is referring, of course, to Mary, the mother of God. John Dryden (1631-1700), a poet and literary critic of the generation after Herbert, criticized Herbert for such playful poetry as the “Anagram,” “Acrostick,” “Wings,” and “Altars,” hating the ways such poets “torture one poor word Ten thousand ways.”

Of course, Dryden was writing for the educated elite. Herbert was always aware of the need to communicate the gospel to people in all stations of life, and did not abhor the simple gimmickry of poetry, provided it was not overdone. He had a genuine interest in ordinary sayings, and collected some 1024 epigrams in Outlandish Proverbs, published in 1640. In our egalitarian age this is something to be commended, not disparaged. Herbert noted the form, experimented with it, and as often as not, produced a good example of it.

Canadian. Husband. Father. Christian. Recovering Settler. A priest of the Church of England, Diocese in Europe, on the island of Crete in Greece. More about me at https://www.linkedin.com/in/bruce-bryant-scott-4205501a/
View all posts by Bruce Bryant-Scott →
This entry was posted in Lent, Poetry and Novels and tagged "Anagram", George Herbert. Bookmark the permalink.