Some well dressed men, according to Esquire Magazine

This is another sonnet by George Herbert, but what a sonnet. Look for a controlling verb and you won’t find one. No, what we have here is a cascade of words creating  pictures of prayer. It sounds like a 16th Century version of Billy Joel’s We Didn’t Start the Fire.

The images are not cute or pious. They range from familiar to unsettling. In order they are:

The first four lines are quite heavenly, and the second four are quite earthy. The imagery of warfare is quite jolting, except that in prayer one ought to truly bring one’s own self, as ugly as that might be; God accepts us with our imperfections.  At line nine, Softness, and peace, and joy, and love, and bliss, the tone changes again. 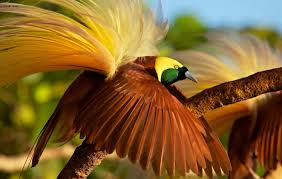 A Bird of Paradise

The final two words jump out as different. Something understood is not an image like the preceding twenty-six pictures. It is a continuation of the first word – Prayer. Prayer is something understood – by human beings, by God. It is paradoxical, a mystery. In my experience prayer is not about changing God’s mind, but about changing – transforming – ours. If I pray regularly I will become a different person. Prayer is taken so often for granted, and it can become perfunctory and rote. But, the way Herbert describes it, it sounds like the most wonderful thing possible. And so may it be for me and for you.

Canadian. Husband. Father. Christian. Recovering Settler. A priest of the Church of England, Diocese in Europe, on the island of Crete in Greece.
View all posts by Bruce Bryant-Scott →
This entry was posted in Lent, Poetry and Novels, Prayer and tagged George Herbert, Prayer, Prayer (1). Bookmark the permalink.

1 Response to George Herbert at Prayer (1)