The Origins of the First World War

I have these three books in my bookshelf. They each discuss the origins of the First World War. They do not agree. 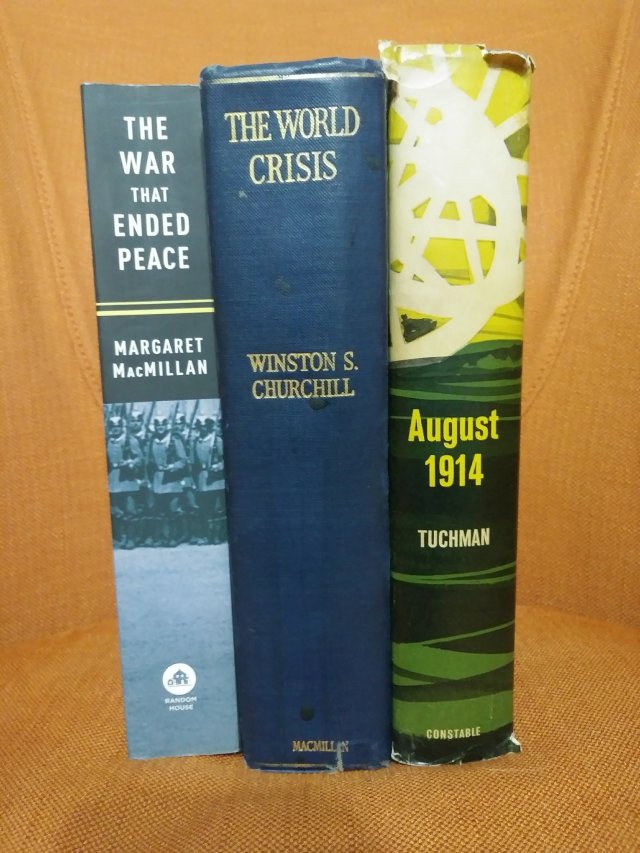 The oldest is The World Crisis by Winston Churchill, and it has my grandfather’s name in it indicating that he bought it in 1931, the year it was published. Churchill has few doubts about who caused the war – the Austro-Hungarian Empire, for the unreasonable ultimatum to Serbia following the assassination in Sarajevo of the heir to the throne, Archduke Franz Ferdinand, and the German Reich of Kaiser Wilhem, which abandoned the prudence of Bismarck in 1890 and provoked the world powers by an incresaing its already militarized nation and backing his allies in Vienna and Budapest. Churchill saw nothing inevitable to the war despite preparations on all sides. He believes that reason and diplomacy could have prevented the catastrophe, but the leaders of the German-speaking empires in Central Europe expected war, prepared for war, and pretty much welcomed it when it came. In comparison, the Russian Empire entered because of honour – they felt obliged to support their south Slavic counsins in Serbia – and of fear – that the more industrially advanced Germans and Austro-Hungarians sought to expand their territory at the expense of Russia, which was still largely rural and uneducated. The French also entered the war because of fear and honour – fear that they would be defeated as they were in 1870, but also because it presented an opportunity to regain Alsace-Lorraine and the lost honour of 44 years before. The British entered the war because they could not countenance a Europe dominated by a Germany even stronger than it was in 1870, and challenging British supremacy on the seas; the invasion of Belgium and an entente with France gave the UK government a cause to go to war. According to Churchill the war was caused by the Kaiser and the German Reich that supported him.

From the excellent article at Vox: “40 maps that explain World War I“

Barbara Tuchman published The Guns of August in 1962 (also known as August 1914, the name by which my grandfather bought it). Tuchman, like Churchill, ascribes blame, and to do so carefully lays out the major decisions made by Russians, Germans, French, and British political and military leaders in order to explain how the war became a long one fought in trenches. She faults all sides equally for making errors in judgment. The German military planners were faulted for the Schlieffen Plan, in particular their assumption that they could invade neutral Belgium without any consequences. French military planners were faulted for their planning that put a premium on attack, and did not consider the devastating power of new artillery and machine guns. The Russians were faulted for fighting a war that they they were delusional about winning, given their strategic and technological backwardness. The British were faulted for not having made it plain to the Germans that they would support France in any conflict with Germany. Neither side was flexible in tactics or strategy, and so none of them could adapt well to unforeseen results. Both sides placed an emphasis on morale, but ultimately the major battles of the first few months were all determined by a concentration of soldiers and materiel. Both sides expected a short war with a single decisive battle, after which all would make peace; instead, after the “Miracle of the Marne” and the “Race to the Sea”, stalemate ensued, which was not broken until August 1918. Tuchman described the way in which politicians and generals make decisions to go to war without really understanding the cost. While November 1918 yielded victors and losers, the number of deaths of soldiers and civilians that it took to get there was unprecedented, and many after the war called into question the cost. Tuchman did not find any single villain, so much as describe a concert of folly.

These guys who went to war all knew each other. Winston Churchill (then President of the Board of Trade in the UK Liberal Cabinet) with Kaiser Wilhelm II in 1909.

Margaret MacMillan is not so sweeping with blame as Tuchman or so definitive as Churchill. In her brilliant The War That Ended The Peace: The Road to 1914 she goes further back than Tuchman to examine the attitudes of the politicians and military prior to the outbreak. She writes at the very end:

And if we want to point fingers from the twenty-first century we can accuse those who took Europe into war of two things. First, a failure of imagination in not seeing how destructive such a conflict would be and second, their lack of courage to stand up to those who said there was no choice left but to go to war. There are always choices.

There are other approaches to understanding the origins of the war.

Marxists believed that the war was the inevitable result of capitalism. Lenin, in his 1917 book Imperialism, the Highest Stage of Capitalism considered the Great War to be the result of a late stage of capitalism. He believed that the proletariat would rise up in revolution and turn the war between imperialist powers into a civil war between classes. In the October Revolution of November 1917 he successfully carried this out in Russia. Things seemed to be moving along like clockwork in Germany and Hungary with seizure of power in Bavaria and Hungary by radical left-wing groups, but in the end the former soldiers of the German Reich, organized into Freikorps, ended such possibilities of communism. Lenin was wrong, of course. While the colonialism side of imperialism could be quite enriching, the all-out war of 1914-18 impoverished and destroyed the economies of the different belligerents. The reasons they went to war may have had the desire for territory behind much of it, but it ignored the non-economic rationale of the Allies and Central Powers. As it turned out, history was not determined by the struggle of classes after all. Countries devastated by the Great War turned not to communist revolt but to varieties of anti-democratic right-wing racist nationalism. Despite the obviousness of this, Marxist reductionism still holds much sway in certain places.

Niall Ferguson in The Pity of War (1998) (which I think I read as a library loan) goes further, and blames the long war on Britain. Had it not stepped in to defend its honour with Belgium and to assist France the war would have ended quickly with a German victory. Then something like the European Union would have emerged earlier, World War II would have been avoided, and the UK would not have been bankrupted. The cause of the Great War – the war we know, the one with trenches – was a massive miscalculation by the Liberal government led by Asquith.

I have not read it (yet), but Prof. Sean McMeekin of Bard College just outside New York City argued that it was really the fault of the Russians in his 2010 book The Russian Origins of the First World War.

While no longer acceptable, many Germans after the Great War, and especially after the imposition of the Versailles Treaty upon them, blamed France for having surrounded the Reich with the intention of gaining Alsace-Lorraine back. While this undoubtedly played a factor in the haste with which France went to war, the reality is that prior decisions of Germany – to back Austro-Hungary in its war against Serbia, encouraged the Russians to embark on their war against the two Central Powers.

You may be surprised to learn that no one has yet written a book blaming Canada for the First World War, but it may happen yet.

A little over twenty years ago the history professor and expert on Ancient Greece Donald Kagan published his masterful On the Origins of War and the Preservation of Peace. Going back to Thucydides (460 – 400 BCE) and his History of the Peloponnesian War, Kagan points out that the ancient Greek historian has someone state close to the beginning, “Why do people go to war? Out of fear, honor, and interest.” Kagan examines five different wars, and the First World War is one of them.

Kagan believes that honour played a larger role in the First World War than is usually thought. In the 1870s and 1880s the first chancellor of the German Empire Otto von Bismarck sought to establish peaceful relationships after unifying Germany and fighting three short wars against Denmark, Austro-Hungary, and France. Kaiser Wilhelm pushed Bismark and that policy aside and sought to expand the military, including the German Navy. This alarmed the British, who dominated the high seas with the Royal Navy, and so the two nations entered into an arms race. The French, resentful after the defeat in the Franco-Prussian war of 1870, sought to regain Alsace-Lorraine and French honour. The Russians, with long memories, feared another invasion from the west, and the growing German Army disturbed them. The French and the Russians entered into an alliance against the Germans, which only convinced Kaiser Wilhelm that the nations around him were ganging up on him. As well, the Russians sought some way of supporting their fellow Slavs and Orthodox peoples in Serbia. The Italians were bumping up against the Austro-Hungarian Empire, which ruled the Italian speaking areas of Trieste and was expanding into the Balkans against a weakened Ottoman Empire; this led them up against Serbia, which sought to expand its territory to include Serbs and Croats now under the rule of Vienna. Greece had just fought two wars, also significantly expanding its territory to the loss of the Ottomans, and saw little reason to stop; this brought them into competition with Albania and Bulgaria.

Kagan argues that the over-riding interest of all the nations was to maintain peace, perhaps an obvious point in retrospect knowing what the cost of the war was. Millions died. France was bled dry, the Austro-Hungarian Empire collapsed, Russia was hit with two revolutions, and the German Reich fell. For Russia, Greece, and Turkey the war did not really end for several years, and at the cost of millions more dead and millions displaced. The various nations were all too willing to go to war, and the leaders and the people – especially the people – suffered for it. Having failed to preserve peace in 1914 they failed to establish a strong peace afterwards. The United States sought to withdraw into isolation, Britain and France sought to expand their power in the Middle East, and the Soviet Union considered how to export revolution. In Germany the myth of “the stab in the back” arose and fueled a turn to the right wing, which promised to re-establish the honour of Germany by military means and re-determine the boundaries of Europe. After the Second World War the United States and its Allies ensured that this did not happen again.

It may be obvious from the review of the books above where I stand on some of these issues. Regardless of what I think, the causes of the Great War will be debated for many years to come. However, the various historians have revealed how complex these things can be. It is one thing to make a timetable after the fact and to see how certain decisions led to historic results, it is another to understand the motivations and thinking behind them. One thing seems clear to me – there was never anything inevitable about what happened. As Margaret MacMillan reminds us, “There are always choices.”

So what lessons might be learned now, some one hundred years after these momentous events? That will be the topic of another post.

Canadian. Husband. Father. Christian. Recovering Settler. A priest of the Church of England, Diocese in Europe, on the island of Crete in Greece. More about me at https://www.linkedin.com/in/bruce-bryant-scott-4205501a/
View all posts by Bruce Bryant-Scott →
This entry was posted in War and tagged Barbara Tuchman, Donald Kagan, Margaret MacMillan, Origins of The Great War, Origins of WW I, Winston Churchill. Bookmark the permalink.