What’s in a Name: The Latest Political Crisis in Greece 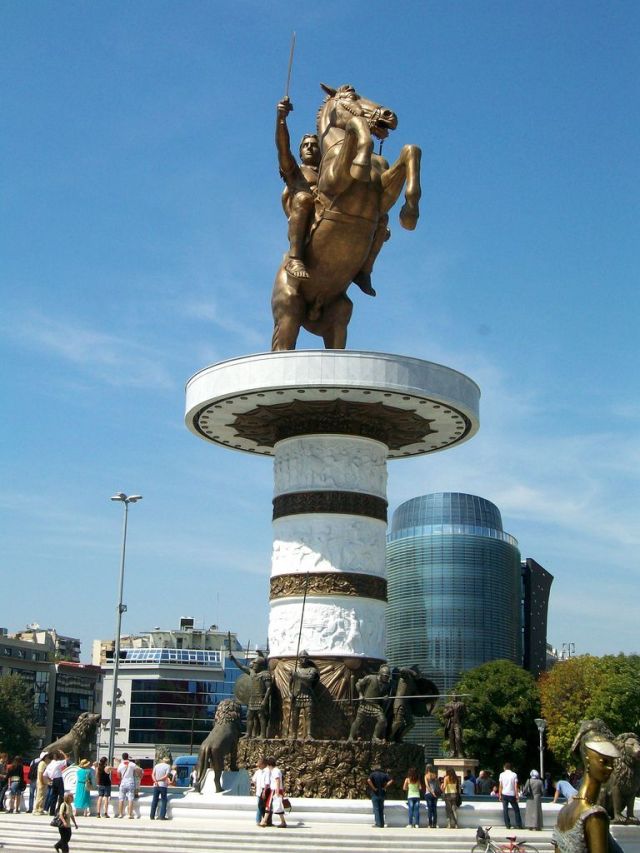 Statue of Alexander the Great in Skopje, Republic of Macedonia

While much of the English speaking world has been focused on revelations of a criminal nature in Washington, and the failure of the May plan for Brexit in the UK, the Greeks are all bothered with a unique crisis: what to call the nation to the north of them.

The Republic of Macedonia in relation to Greece. The dotted line represents an area known as Macedonia under the Romans. the two black dots in northern Greece are the two ancient capitals of the Kingdom of Macedonia.

The nation calls itself The Republic of Macedonia. It used to be part of Yugoslavia until that nation fell apart in 1991. It had been known as Socialist Republic of Macedonia within the Socialist Federal Republic of Yugoslavia, and under the non-Soviet communism of Marshal Tito it had its own constitution, president, ethnic institutions, and the right of secession. While there is a large Albanian minority within the country, the majority ethnic group calls themselves Macedonians, call their language Macedonian, and so call the nation Macedonia and its citizens Macedonians. The ethnic Macedonian are mostly members of the Macedonian Orthodox Church, while the Albanian Macedonians tend to be Muslim. The nation claims historical links back to the ancient Kingdom of Macedon – that little country which, under King Philip II in the 4th Century BCE, conquered Thessaly, Attica, and the Peloponnese, and from which Philip’s son, Alexander the Great, launched his conquest of the Persian Empire 2300 years ago. For that reason the modern Macedonians have erected a massive statue of Alexander in the capital city, Skopje. One would think that if anybody had a claim to the name Macedonia it would be the two million people living there.

Well, many in Greece beg to differ. They point out that the Macedonian language is not the language spoken by Alexander the Great. He would have spoken the language of his people, which, unfortunately, was never much of a written language, and so we do not have any records beyond a few inscriptions. We do know that in addition to ancient Macedonian he also spoke Attic Greek, for he was tutored by Aristotle himself. Most scholars believe that ancient Macedonian was related to Greek, and most ancient Greeks considered the Macedonians to be Greeks as well, if a bit strange-tongued and verging on being a little to much like the barbarians they bordered on. The ancient Kingdom of Macedonia was centered in the area around what is now the city of Thessalonica,what is now Greece’s second largest city. The sites of its old capital Aegae and newer capital Pella are both within the modern nation of Greece. Indeed, the area of northern Greece to the south of the Republic of Macedonia is known as Macedonia, and has been part of the Hellenic Republic since 1913, after the First Balkan War of 1912-1913. It is not at all unusual to meet a Greek speaking person who says that they come from Macedonia, and by Macedonia they definitely do not mean the Republic to the north.

The modern Macedonian language, they will point out, came to be written comparatively late, really only in the 19th century, and was otherwise considered to be a dialect of Bulgarian. Thus Greek Macedonians claim that the Macedonian Macedonians have no real claim to the name. Like the Bulgarians, Serbs, and Croats they are really southern Slavs (which is what Yugoslav means) whose ancestors came to the Balkans in the 6th and 7th centuries – 900 to 1000 years after Philip II and Alexander the Great. While the name Macedonia was used and extended by the Roman Empire to cover the area now occupied by the Republic of Macedonia, that was just a dumb jurisdictional decision – just the kind of thing one might expect those arrogant Latin-speaking Romans to do.

The independence and expansion of the modern Hellenic Republic is still sufficiently recent that the Greeks are very defensive of their territory. In 1913 they only just beat Bulgaria to controlling Thessalonica and the surrounding area. In the Second World War, after Germany conquered Greece, the Nazis gave Greek Macedonia to the Bulgarians to occupy. Given that that the Greeks believe that the Macedonians of Macedonia are really Bulgarians, they are deeply suspicious.

The old flag of Macedonia 1991-1995 on the left, and the new flag, adopted in 1995 and now in use. Greece blockaded the land-locked Republic of Macedonia because the old flag used the Vergina Sun. The symbol was found in the city of Vergina in northern Greece on grave steles of ancient Macedonian rulers and was considered by many to be an historic royal symbol of the old kingdom.

Many Greeks are convinced that the people and leaders of the Republic of Macedonia secretly want to take Greek Macedonia for themselves. For this reason the Greeks have thrown all their diplomatic efforts into insisting that the Republic of Macedonia be known internationally by the clumsy name The Former Yugoslav Republic of Macedonia (“FYROM”). This is the name by which it was admitted into the United Nations and the way it is marked on many maps. Greece, as a member of both the European Union and NATO has vetoed the membership of the FYROM until it formally changes what it calls itself. The Greeks are notable in spending more of their GDP on their military than any member nation other than the US; this is not so much to defend the country from Russia as a perceived threat from their NATO ally in Turkey. Presumably it would be useful in fighting off any nationalist Macedonians.

Zoran Zaev (right) and Alexis Tsipras in Oteševo, Macedonia after signing the agreement.

This was the status quo for twenty-five years. In the past year the Prime Minister of Greece, Alex Tsipras, made efforts to reach a compromise with the government of the Republic of Macedonia. They have now both agreed to change the name to the Republic of North Macedonia. The deal, of 17 June 2018, and which contains certain clauses around culture and that huge statue in Skopje, was finalized at Prespa Lake, between the two countries, and so is known as the Prespa Agreement. Once the two countries ratify the agreement Greece will remove its objections, and the Republic of North Macedonia can apply to join NATO and the EU.

Although t has been hailed internationally, many people in the Republic of Macedonia and in Greece dislike the agreement intensely. Opponents in what might soon be called North Macedonia boycotted the referendum to ratify it, thus resulting in too low a participation rate to take effect. Instead, the legislature had to approve it. The Prime Minister of Greece, who leads a coalition, is opposed by the leading opposition party, and even the leader of his partner in the coalition has come out in opposition. There was a vote of confidence in the governing coalition a few days ago, but it survived, barely. What is not clear is if Tsipras has the numbers in the legislature to pass the ratification by Greece. I suspect the kind of horse-trading that went on in Spielberg’s Lincoln is taking place in Athens this week.

The controversy over the name is one aspect of nationalism. Both Greeks and Macedonians (excuse me – North Macedonians) began to construct their identities in the modern era, beginning with religion and language but recovering ancient history and symbols, as well as establishing jurisdictions where they are the majority. The Prespa Agreement is a step by both nations towards consolidating their respective identities while also living in a friendly peace with their neighbours. I hope it passes.

Canadian. Husband. Father. Christian. Recovering Settler. A priest of the Church of England, Diocese in Europe, on the island of Crete in Greece. More about me at https://www.linkedin.com/in/bruce-bryant-scott-4205501a/
View all posts by Bruce Bryant-Scott →
This entry was posted in Greece and tagged Greece, Greek Macedonia, Macedonia, North Macedonia, Prespa Agreement. Bookmark the permalink.