Lessons from the Great War: The End

In my initial post on the Great War I asked four questions. The first of them was about the reasons for the war, and the second was about why the belligerants persisted in the war at such great cost rather than negotiating peace when the stalemate emerged. The causes of the First World War, and the reason the war kept going despite the failure of either side to progress much, have both been analyzed many times in many books, and there are many points of disagreement. Regarding the third question, as to the end of the war – things are more clear.

To frame the question a bit differently, why did the Allies win the Great War and not the Central Powers?  Remember that the Armistice of November 11 1918 took most people by surprise. Both the soldiers and the leaders of the nations assumed the war would go on well into 1919.

Let’s assume that “victory” and “defeat” is based on the achievement of war goals. Let’s also assume that the war was determined on the Western Front. The German war goals were to defeat the Russian Empire and the French Republic. They accomplished the former but not the latter. The Allies never lost the will to throw soldiers into the meat grinder of the Western Front. The Germans, having made a victor’s peace with the Bolsheviks in 1917, threw all they had into the Spring 1918 offensive. While they pushed the Allied armies back, they were unable to completely destroy them, or call into question the will of the politicians to continue. By September 1918 the Allies had finally figured out how to overcome trench warfare. It required a combination of mechanized warfare and squad-based tactics that, at a high casualty cost, finally made the war mobile. The Allies had also figured out that battles petered out after a few days; after achieving the destruction of the enemy troops and the gain of some land, they applied pressure at some other point. The German front never collapsed, but they were constantly in retreat in the last hundred days, and there was nothing the Germany army could do to stop it.

It was only at that point that the will of the German leadership began to fail. If the Allies only comprised the British and the French the German leadership might have been able to look to a time when Allied offensive would run out of steam, but the fact was that the Americans were now in the war, and even though relatively few of them were fighting in 1918, they would become the main force in 1919.

The Central Powers came to believe that defeat was inevitable in or around September 1918, and importantly, that it was the Germans who saw it as such. Tactically I believe the Allied Army, still mainly French and British in 1918, could have taken the war to the Rhine, but it would have required the Americans to take it into the heart of Germany. The Germans knew this, and so sued for peace.

The Great War was a long, bloody war of attrition. By late 1918 neither side had been bled dry, but both sides were aware of their limits. Had the Americans not entered the war in 1917 the Germans could have theoretically moved to fight a purely defensive war and hope that the British and French would run out of soldiers. The entry into the war of the Americans meant that the Allies had significantly more resources with which the Germans could not compete.

So, in another sense, the defeat of the Central Powers became inevitable when the US entered the war. Retrospectively we can see that this was the case, but it was not apparent at the time. After all, while the German Reich was indeed relatively new, it had still been unified for over 40 years when war was declared. The Austro-Hungarian Empire seemed monolithic, and while many saw the Ottoman Empire as the sick man of Europe it was no push over, as Gallipoli and the Siege of Kut showed.

An argument can be made that the defeat of the Central Powers became inevitable when the offensive of 1914 ended in the establishment of trench warfare. It would have required the Germans suing for peace while standing on Allied territory, and then seeing what happened. The fact that neither side would consider doing so in 1914 committed both sides to a war of attrition, and it was quite unclear at that time who would have been able to win it. Obviously, as it turned out, the Allies were capable and did win the war, so one might say that the defeat was inevitable in the late autumn of 1914. But, of course, hindsight is 20:20. 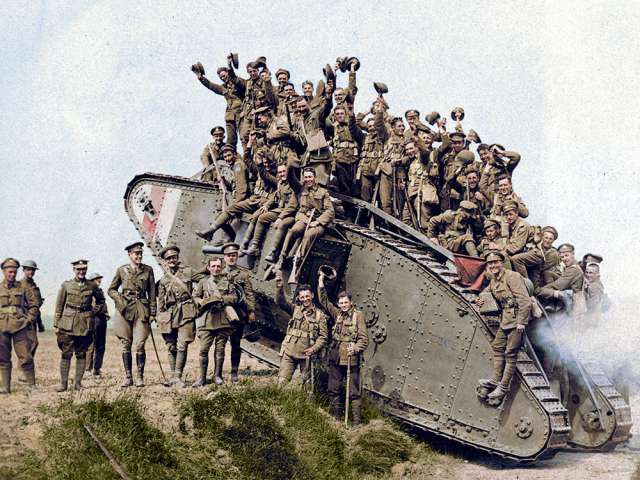 So, to summarize, the war ended because the Germans lost the will to fight. They lost the will to fight because the Allies were consistently advancing on the western front because they were using mechanized warfare – tanks – and they had developed squad tactics. Strategically, instead of reinforcing exhausted troops after several days of battle, they rapidly shifted the attack to another weak point in the line. There was never a complete breakthrough by the Allies, but the Germans could not maintain their ground and were constantly moving backwards. Finally, although the US Expeditionary Force was still relatively small in 1918, the German leadership knew that it would expand massively in 1919, so that it could take over from the depleted French and British.

Canadian. Husband. Father. Christian. Recovering Settler. A priest of the Church of England, Diocese in Europe, on the island of Crete in Greece. More about me at https://www.linkedin.com/in/bruce-bryant-scott-4205501a/
View all posts by Bruce Bryant-Scott →
This entry was posted in War and tagged Armistace, The End of the Great War, The End of World War I, The Great War, The Hundred Days. Bookmark the permalink.