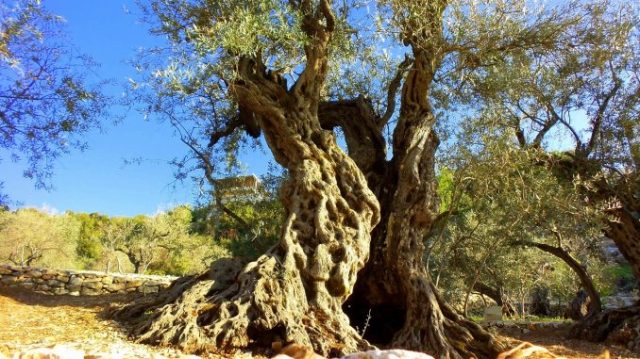 “The whole point of grafting is that each part of the grafted tree keeps its original character.” – Greek olive tree farmer talking to author Sara Alexi

In today’s second reading from the Daily Office Lectionary Paul is building to the climax of his Letter to the Romans, in which he addresses the Gentile Christians about their pride versus Jews and Jewish Christians.

Rom 11.13–24
Now I am speaking to you Gentiles. Inasmuch then as I am an apostle to the Gentiles, I glorify my ministry in order to make my own people jealous, and thus save some of them. For if their rejection is the reconciliation of the world, what will their acceptance be but life from the dead! If the part of the dough offered as first fruits is holy, then the whole batch is holy; and if the root is holy, then the branches also are holy.

But if some of the branches were broken off, and you, a wild olive shoot, were grafted in their place to share the rich root of the olive tree, do not vaunt yourselves over the branches. If you do vaunt yourselves, remember that it is not you that support the root, but the root that supports you. You will say, ‘Branches were broken off so that I might be grafted in.’ That is true. They were broken off because of their unbelief, but you stand only through faith. So do not become proud, but stand in awe. For if God did not spare the natural branches, perhaps he will not spare you. Note then the kindness and the severity of God: severity towards those who have fallen, but God’s kindness towards you, provided you continue in his kindness; otherwise you also will be cut off. And even those of Israel, if they do not persist in unbelief, will be grafted in, for God has the power to graft them in again. For if you have been cut from what is by nature a wild olive tree and grafted, contrary to nature, into a cultivated olive tree, how much more will these natural branches be grafted back into their own olive tree.

Paul uses the metaphor of grafting in order to deflate any pride the Gentile Christians might have. Grafting involves taking the young stalk of a plant of one species or variety (the scion) and attaching it to another plant (the root or rootstock) so that it takes advantage of its vascular system. Plants can naturally grow together, so humans have long used it as a method of growing various types of fruit. Typically the rootstock is of a wild variety that is resistant to disease, grows easily, but does not produce much fruit or fruit of a small size. The scion is typically domesticated, productive, and desirable. Grafting is used with fruit trees like apples, vines such as grapes for wine, ornamentals such as roses and cacti, and sometimes unusual combinations such as potatoes and tomatoes. In Paul’s time the grafting of domesticated olive scions onto wild varieties of olive rootstock was everywhere. Once the graft (or grafts) have taken, most of the wild branches are broken off so that the domesticated scions can derive sustenance from the rootstock.

Paul twists the metaphor, though. Instead of grafting a domestic scion onto a wild rootstock, Paul describes the extension of the Gospel to Gentiles as the grafting of a wild scion on a domesticated rootstock, which no farmer would actually do. This twisted metaphor corresponds to the surprising mission to God to the Gentiles – its strange, like the father in the story of the prodigal son, or the owner who pays all his workers the same regardless of whether they worked all day or one hour.

Gentiles have no right to be proud, as if they were better than the Jews who were broken off the plant so that they might be grafted in. The Gentiles did nothing to deserve being grafted in, as they have faith as a gift from God. Then Paul talks about how Israel will be grafted it anyway, provided they do not persist in unbelief. That could mean that either Israel will turn to Christ, or that they will be re-grafted in on the basis that their faith is similar to that of the patriarchs and prophets (most probably the former, but things develop in the rest of the chapter).

The grafting of the Gentiles into Israel is described as” unnatural” which in Greek is παρὰ φύσιν (para phusin, or “contrary to nature”). Interestingly, this is the same phrase used to condemn same-sex behaviour in Romans 1.26; this prompts the question is that if God does unnatural things, is there an argument that not all things considered contrary to nature are necessarily wrong, but if filled with grace and love may become praiseworthy?

Finally, as the Greek farmer said to Sara Alexi, “The whole point of grafting is that each part of the grafted tree keeps its original character.” If one really understands grafting, the rootstock must stay alive and continue as it was. The Gentile Christians who are disappointed that Jewish Christians and Jews continue with their practices and observances are people who do not understand this principle. There may be some graft chimeras life Paul, but the rootstock in this case remains Jewish.

Tomorrow we conclude the Lenten Readings from Romans (we pick up with Romans in chapter twelve on the Tuesday after the Sixth Sunday of Easter). Starting on Monday in Holy Week, we read bits and pieces from Paul’s Letter to the Philippians, First and Second Corinthians, and finish with passages from the First Letter of Peter and the Letter to the Hebrews.

Canadian. Husband. Father. Christian. Recovering Settler. A priest of the Church of England, Diocese in Europe, on the island of Crete in Greece. More about me at https://www.linkedin.com/in/bruce-bryant-scott-4205501a/
View all posts by Bruce Bryant-Scott →
This entry was posted in Lent and tagged Grafting, Jews and Gentiles, Pride, Romans 11.13-24. Bookmark the permalink.