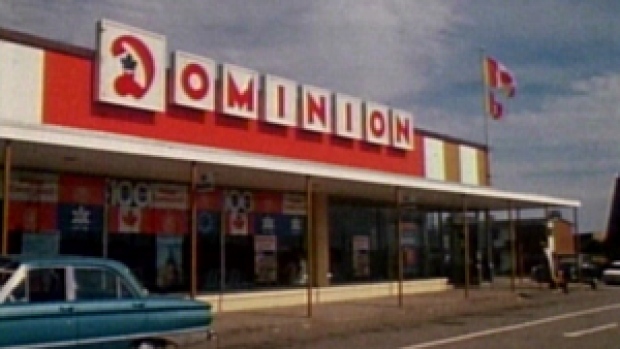 For some (well, Star Trek fans) the Dominion is an evil empire from the Delta Quadrant that fought the Federation in Deep Space Nine. For Canadian constitutional historians it is the original name of Canada – the Dominion of Canada – a designation which largely fell out of favour in the post-war era as the British Empire fell apart and Canada asserted its distinctiveness and independence from Mother Britain. And, for some of us of a certain age, it is a Canadian grocery store chain that ended rather abruptly in the 1960s in western Canada and in the 1980s in Eastern Canada (except in Toronto, where they remained until 2008, and in Newfoundland, where they still operate as a part of Loblaws).

Dominion is, of course, a much older word, and it means the power of the Dominus or Lord. In the passage today from the second reading in the Daily Office Lectionary several things are described as having dominion : death, “the abundance of grace and the free gift of righteousness,” and “sin”. In case you did not notice, these things are somewhat different from each other.

Rom 5.12–21
Therefore, just as sin came into the world through one man, and death came through sin, and so death spread to all because all have sinned— sin was indeed in the world before the law, but sin is not reckoned when there is no law. Yet death exercised dominion from Adam to Moses, even over those whose sins were not like the transgression of Adam, who is a type of the one who was to come.

For Paul, “sin” is not just a theological concept and “death” is not just a natural phenomenon. For Paul sin came into the world by the actions of Adam (he’s curiously silent on Eve), and the consequence of that first disobedience is death. Both sin and death are active, malevolent powers in the world. In First Corinthians 15 Paul writes in a similar vein about how resurrection will unfold:

20 But in fact Christ has been raised from the dead, the first fruits of those who have died. 21For since death came through a human being, the resurrection of the dead has also come through a human being; 22for as all die in Adam, so all will be made alive in Christ. 23But each in his own order: Christ the first fruits, then at his coming those who belong to Christ. 24Then comes the end, when he hands over the kingdom to God the Father, after he has destroyed every ruler and every authority and power. 25For he must reign until he has put all his enemies under his feet. 26The last enemy to be destroyed is death.

Death is described in First Corinthians as an enemy, and is included with “every ruler and every authority and power”. Who are these enemies? In all probability they are the fallen angels, the devil and the demons who exert power over the oppressive rulers of the world and lead people astray. As sin came into the world through Adam, human beings are now predisposed to be ignorant of God’s ways and to find novel ways to sin. These evil Domini will attract humans to idols to entrench their warped thinking, and lead them to social evils such as covetousness, leading to theft and the exploitation of the vulnerable, the widow and orphan.

Death exercises dominion over humanity. I read the story of the fall in Genesis 2-3 not so much as literal history, but as a description of our human situation. I find it to be a fact that we experience death as something unfair and absurd, no matter how much science might tell us that it is natural. I find it to be a fact that we are predisposed to do that which is hurtful to others and to be able to justify murder and genocide. Given an opportunity by God, human beings will find a way to abuse it. Power corrupts, and no matter how much we might own and possess we are never happy. As Augustine says, “We are restless until we find our rest in you, O God”.

God reaches out to us in Jesus Christ. Paul’s comment that “the free gift is not like the trespass” is a distinction in kind and amount; in kind, in that the gift brings justification, not condemnation, and in number in that the gift is greater than all the sin in the world and overflows so that “the abundance of grace and the free gift of righteousness exercise dominion in life through the one man, Jesus Christ.” Paul knows himself to be under that dominion, and that the God’s love has been poured into his heart. It means that he has become a slave of Jesus Christ – he has surrendered himself to him – but paradoxically he experiences this servitude as liberty, because it is freedom from sin and death.

Now, the next few verses raises an interesting question.

Therefore just as one man’s trespass led to condemnation for all, so one man’s act of righteousness leads to justification and life for all. For just as by the one man’s disobedience the many were made sinners, so by the one man’s obedience the many will be made righteous. But law came in, with the result that the trespass multiplied; but where sin increased, grace abounded all the more, so that, just as sin exercised dominion in death, so grace might also exercise dominion through justification leading to eternal life through Jesus Christ our Lord.

While it is evident that sin prevails throughout humanity, and especially among the pagan Gentiles, Paul suggests that Christ’s self-offering “leads to justification and life for all”.  What does “for all” mean? Does it mean that all people can access this grace, or does it mean that independent of anybody’s faith that Christ has justified everybody? If I were a Universalist I would seize on this verse as a proof text that God wills everyone to be saved; this is an approach that goes all the way back to Origen in the 3rd century. But I suspect that is too strong a reading of the word “all” – yes, in theory Christ’s sacrifice is sufficient for all of humanity, but many will reject the gift and persist in violence and perversity despite knowing all about it.

It is important to note that while justification leads to eternal life, that is not its only benefit. While Protestants will emphasise that justification is only an imputation of righteousness, Catholics will point out that the abounding grace leads to sanctification. If in baptism humans die to sin and rise to new life, and internal and spiritual grace is at work and it is not a mere sign. Justification when accepted brings about a change in a person – perhaps dramatically in the case of Paul, more subtly for other folks. While still subject to temptation and sin, there is still a sense that a follower of Christ is transformed as he was, and is a new creation; that the same power which raised Jesus from the dead is at work in us. Eternal life should not be construed just as being in “heaven” – that’s a limited, warped understanding – but rather it is life with God in Christ. We have entered a new Dominion, one which will never be closed or taken over.

Canadian. Husband. Father. Christian. Recovering Settler. A priest of the Church of England, Diocese in Europe, on the island of Crete in Greece. More about me at https://www.linkedin.com/in/bruce-bryant-scott-4205501a/
View all posts by Bruce Bryant-Scott →
This entry was posted in Lent and tagged Dominion in Life, Dominion of Death, Romans 5.12-21. Bookmark the permalink.