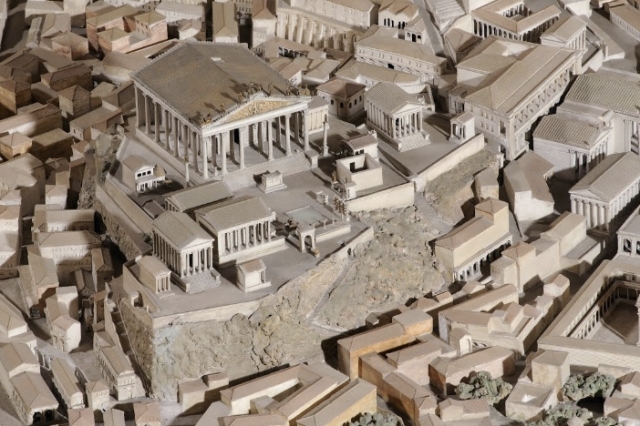 Today we begin reading Paul’s Letter to the Romans, and over the next four weeks we will work our way from the very beginning to the end of chapter eleven. We then pick it up later in Eastertide through the end of chapter 15 (In Year 2 of the Daily Office Readings we read the whole letter in the weeks after Pentecost).

The Letter was written before Paul’s final visit to Jerusalem, where he was arrested, imprisoned, brought before the a Council of Jewish leaders, the Roman governors, the Tetrarch Herod Agrippa, and sent to Rome for a final decision about his fate (see Acts 21-28). Unlike all his other letters that have survived, Paul is not writing to congregations that he had helped found. The Christian congregations in Rome had already been founded by anonymous Christians more than a decade earlier. Tradition states that Peter went to Rome, and tradition also states that both died martyr’s deaths in Rome, but these traditions date from decades after the writing of these letters. While there may be some truth in the tradition, it is not as historically significant as a primary document such as the Letter to the Romans.

Greek and Roman letter writing tended to follow a pattern, and Paul in Romans uses all his rhetorical abilities. Paul would have dictated the letter, but the letter is so well crafted that I suspect he revised it before approving a final version to be sent off. It is, after all, a small book that is as large as the Gospel of Mark in length. The Roman Empire did not have a postal system as we understand it; the letter would have been carried by a private individual, by foot, animal, or (most likely) ship, and that person would also be responsible for reading it to the audience.

In this first section we get the Paul’s salutation (1-7) and thanksgiving (8-15). Typically the themes of the letter are adumbrated in these sections.

Rom 1.1–15
Paul, a servant of Jesus Christ,
called to be an apostle,
set apart for the gospel of God,
which he promised beforehand through his prophets in the holy scriptures,
the gospel concerning his Son,
who was descended from David according to the flesh
and was declared to be Son of God with power
according to the spirit of holiness by resurrection from the dead,
Jesus Christ our Lord,
through whom we have received grace and apostleship
to bring about the obedience of faith among all the Gentiles
for the sake of his name,
including yourselves who are called to belong to Jesus Christ,

To all God’s beloved in Rome, who are called to be saints:

Grace to you and peace from God our Father and the Lord Jesus Christ.

First, I thank my God through Jesus Christ for all of you,
because your faith is proclaimed throughout the world.
For God, whom I serve with my spirit by announcing the gospel of his Son,
is my witness that without ceasing I remember you always in my prayers,
asking that by God’s will I may somehow at last succeed in coming to you.
For I am longing to see you
so that I may share with you some spiritual gift to strengthen you—
or rather so that we may be mutually encouraged by each other’s faith,
both yours and mine.
I want you to know, brothers and sisters,
that I have often intended to come to you (but thus far have been prevented),
in order that I may reap some harvest among you
as I have among the rest of the Gentiles.
I am a debtor both to Greeks and to barbarians,
both to the wise and to the foolish
— hence my eagerness to proclaim the gospel to you also who are in Rome.

One of the interesting questions which is hotly contested is the purpose of the letter. On the one hand, Paul is preparing to visit Rome, as he says, so that he might “share with you some spiritual gift to strengthen you—” and then says, a little more modestly, “or rather so that we may be mutually encouraged by each other’s faith, both yours and mine.” He wants to  “reap some harvest among you as I have among the rest of the Gentiles.” That much is clear, then. As well, in Romans 15 he writes:

23But now, with no further place for me in these regions, I desire, as I have for many years, to come to you 24when I go to Spain. For I do hope to see you on my journey and to be sent on by you, once I have enjoyed your company for a little while.

Paul, then, plans a trip to Rome on his way to Spain. He hopes to be sent on by the Romans – and perhaps desires both their moral and material support.

However, he is also aware that there are some divisions amongst the Christians in Rome, apparently between the Jewish Christians and the Roman Christians. The greater part of the letter, then, is a theological reflection on the good news as it applies to Jews and non-Jewish Gentiles. Some scholars believe that Paul was addressing himself primarily to the Gentile Christians who for some reason had got it in their heads that they were superior to the Jewish Christians. Before heading to Rome Paul wants to make sure that people know his thoughts on the matter.

Canadian. Husband. Father. Christian. Recovering Settler. A priest of the Church of England, Diocese in Europe, on the island of Crete in Greece. More about me at https://www.linkedin.com/in/bruce-bryant-scott-4205501a/
View all posts by Bruce Bryant-Scott →
This entry was posted in Lent and tagged Paul, Romans 1.1-15. Bookmark the permalink.