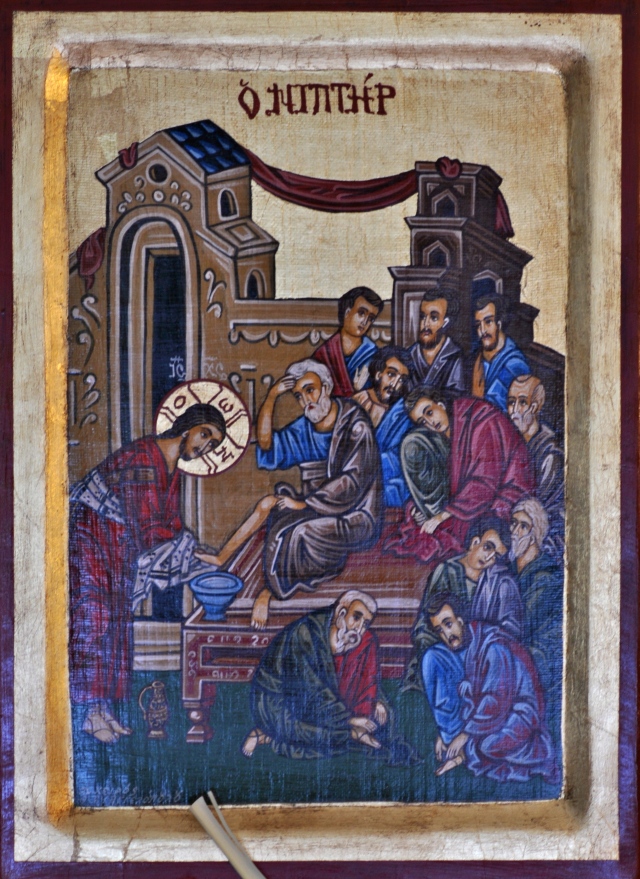 Icon of the Footwashing

The reading from Philippians this evening is at the core of the third chapter in my PhD dissertation. So it’s kinda important to me.

The dissertation, which I am doing at Heythrop College, University of London, is on the theological legacy of the “Indian Residential Schools“. As Canadians are aware, from about 1880 until 1970 the Canadian federal government attempted to assimilate some 150,000 First Nations and Inuit children by apprehending them from their parents and sending the children to schools, frequently hundreds of miles from their families. They were not allowed to use their languages, practice their culture,or observe their ancient spiritual traditions. The older children were expected to work half the day. Nutritional standards were low. Mortality rates were high – in some years up to 50% of the population in some schools died. Physical discipline – caning, spanking, the strap, and worse – was used extensively for minor infractions, despite such discipline being largely foreign to the indigenous cultures. The schools were magnets for sexual predators to become members of the staff, and each predator had multiple victims. The stated purpose of the schools was to assimilate the indigenous population so that there would effectively be no indigenous people left in Canada. This fits the definition of genocide in the Convention on Genocide.

The federal government subcontracted the operation of these schools to the main church denominations in Canada at the time: Roman Catholic religious orders; Methodists, Presbyterians, and, after 1925, the United Church of Canada; Baptists; and the Anglican Church of Canada. The churches were enthusiastic supporters of these schools, believing that they were involved in civilizing mission to a savage and declining people. My dissertation asks why this is the case. While much can simply be blamed on colonial and imperialistic mindsets, I think that the churches were particularly motivated by their theology.

In the first chapter of the dissertation I develop, using the philosophy of Emmanuel Levinas (1906-1995) a critique of totalizing thought that leads to violence. At its most extreme, this leads to genocide. In the second chapter I describe the theologies of mission that informed the people operating the Residential Schools, and use the method developed in Chapter One to critique it.

Chapter Three asks if there are ANY theologies that might withstand the Levinasian critique. I offer up a theology based on Philippians 2.5-11 as one that does. This type of theology is called “kenotic theology” from the Greek word “kenosis” which means “emptying out”. I argue that a kenotic theology is more likely not to lead Christians into the kind of awful tragedy that the Residential Schools have been. The contrast between a kenotic theology and the theologies of the Residential schools can be seen as a series of opposites, including:

+ instead of power, a reliance on weakness;
+ instead of an inward emphasis upon personal salvation, an outward concern for the needs of others;
+ instead of uniformity, a celebration of plurality;
+ instead of a valorization of reason and “logical” argumentation, an acceptance of personal foolishness and the use of parabolic narrative;
+ instead of easy alliances with government, a suspicious or questioning of the state;
+ instead of some objective “Truth” being out there, authorized and promulgated, and understanding of “the Good” as reached through dialogue;
+ instead of understanding events in history as “providential”, looking for an eschatological and apocalyptic breaking of the divine into history; and
+ instead of the military metaphor of strategic deployment of resources, a spendthrift generosity that never asks if heaven can afford the cost.

This pretty much describes the mission of God in Christ. The Word made flesh comes to us not as one to be served but as a servant. The son of Mary does not run around claiming he is God or the Son of God and arrogantly overwhelms people with this datum, but instead demonstrates who is he by telling parables and healing the sick, driving out demons, and proclaiming the coming reign of God. He and his disciples subversively uses terms of the Imperial Cult like “Kingdom”, “Good news”, and “Coming” to describe what he was doing, as deconstructions of the false claims of the Emperors and the rule of the Empire. While not desiring death he accepts that being true to the calling of God leads to persecution, physical abuse, and ultimately death, even death upon a cross. But the love of God is as strong as death, and Jesus is raised up, and we who are in him are raised up with him. His early disciples (and we his later ones) sought to die to the world and then live the resurrected life as much as possible. This entailed a radical acceptance that overcame supposedly cosmic binaries of slave and free, gentile and Jew, woman and man.

On this Christmas Eve, then, as we head to “midnight masses” (or, as they increasingly seem to be, “It’s midnight in Toronto mass”), let us remember that Christmas is not just about a child in Bethlehem, but about each of us. What we think affects what we do. What theology do we have that will help us to become more like Jesus?

Isaiah 59.15b–21
The Lord saw it, and it displeased him
that there was no justice. He saw that there was no one,
and was appalled that there was no one to intervene;so his own arm brought him victory,
and his righteousness upheld him. He put on righteousness like a breastplate,
and a helmet of salvation on his head;he put on garments of vengeance for clothing,
and wrapped himself in fury as in a mantle. According to their deeds, so will he repay;
wrath to his adversaries, requital to his enemies;
to the coastlands he will render requital. So those in the west shall fear the name of the Lord,
and those in the east, his glory;for he will come like a pent-up stream
that the wind of the Lord drives on.

Philippians 2.5–11
Let the same mind be in you that was in Christ Jesus, who, though he was in the form of God,
did not regard equality with God
as something to be exploited, but emptied himself,
taking the form of a slave,
being born in human likeness.And being found in human form,    he humbled himself
and became obedient to the point of death—
even death on a cross.

Therefore God also highly exalted him
and gave him the name
that is above every name, so that at the name of Jesus
every knee should bend,
in heaven and on earth and under the earth, and every tongue should confess
that Jesus Christ is Lord,
to the glory of God the Father.

Canadian. Husband. Father. Christian. Recovering Settler. A priest of the Church of England, Diocese in Europe, on the island of Crete in Greece. More about me at https://www.linkedin.com/in/bruce-bryant-scott-4205501a/
View all posts by Bruce Bryant-Scott →
This entry was posted in Advent and tagged Advent, Christmas, Incarnation, Jesus, Kenosis, Philippians 2.5-11. Bookmark the permalink.

1 Response to Day Twenty-Eight of An Advent Calendar (Evening): Christmas Eve – Pouring Out Divinity into Humanity