Confessions of a Conflict Junkie

A sermon preached
on The Fifth Sunday after Trinity
(the Sixth Sunday after Pentecost)
at The Anglican Church of St. Thomas the Apostle, Kefalas, Crete
on July 12, 2020 11:00 am. 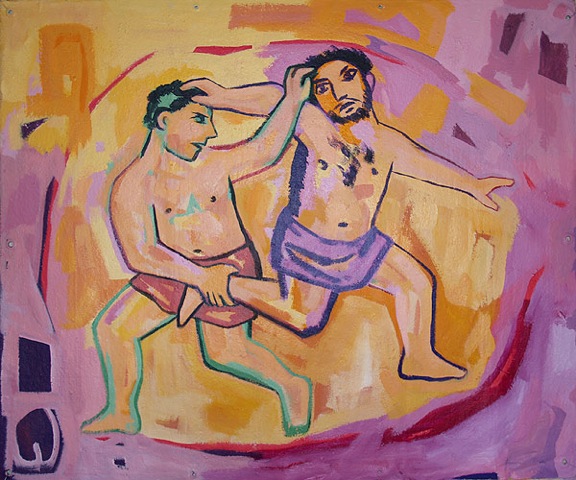 And the Lord said to [Rebekah],
“Two nations are in your womb,
and two peoples born of you shall be divided;
the one shall be stronger than the other,
the elder shall serve the younger.”
When her time to give birth was at hand, there were twins in her womb. The first came out red, all his body like a hairy mantle; so they named him Esau. Afterward his brother came out, with his hand gripping Esau’s heel; so he was named Jacob.[That is, he takes by the heel ] Genesis 25.23-26.

Did you fight with your siblings, your brother or your sister? “Mom, make him stop, he’s looking at me!” Have any of you served in the military, or come from military families? That’s a different type of fighting. Or perhaps you worked in places where conflict contributed towards it being a toxic environment.

The Reality of Conflict

Conflict in the church, as in families, and as is the case among nations, is inevitable. We may have a naïve belief that it should not be so in the church, but as long as we have strongly held beliefs AND we are living, breathing human beings, we will be in conflict with one another.

I think Jesus knew this. From the moment the Spirit came upon him at his baptism he was in conflict. Satan attacked him in the desert, and then through the demon-possessed, and finally at his crucifixion. Jesus was in conflict with the people in his home town, and was criticised by the scribes and Pharisees. He was opposed by the religious leaders in Jerusalem, as well as Herod Antipas and Pontius Pilate. He overturned the tables of the money changers in the Temple.  In the end he was tortured and executed by the imperial authorities of Rome. Jesus knew the reality of conflict.

Even among his disciples there was conflict. James and John jockeyed for position in the kingdom of heaven. Peter contradicted Jesus about the necessity of his death, and was told. “Get behind me Satan!” Judas betrayed him.

There was conflict in the early church. Paul describes the argument he had with Peter in his Letter to the Galatians. There were divisions in the churches in Corinth and Rome. So conflict is a reality in this broken, fragile, fallen world. If one is speaking truth to power, if one lives God’s way in a way that worships idols, there will be conflict. We do not leave our sinful selves behind when we enter the doors of the church.

The critical issue is not that there is conflict, as challenging as that might be, but how we approach it, because I believe that there is a Christian way of dealing with it. It is a way that is demonstrated in Christ Jesus, in his life and teaching, in his suffering and death, and in his resurrected life.

Let’s think about these two. Jacob is literally at Esau from birth, grabbing at him. Both have their virtues. Esau is a hunter, and a good one. Jacob is clever – but perhaps a little too clever. Indeed, as we read through Genesis, Jacob is the trickster of Israelite tradition, the Loki of the Hebrews, the Raven of the sons of Abraham. They start as brothers, but the ancient Israelites understood Jacob and Esau as being the ancestors of the nations of Israel and Edom, two kingdoms that fought one another. Conflict at one level can escalate to another.

When I became the Executive Officer of the Diocese of British Columbia I became a bit of a crisis and conflict junkie. In parish ministry I was one of those clergy who tried to avoid conflict, which just meant that I handled it poorly. So when I leaped into this senior position I found clergy and lay leaders coming to me for help to manage arguments and disputes in parishes. I really did not have a clue. So, I took a course in conflict management at the local university.

I discovered that there were at least ten levels of escalation of conflict. I was shown how it started small – with parents and children, and then got bigger at the level of  neighbourhoods and small organizations, and then to municipalities and labour-management disputes in companies, getting even bigger with states or province, to warring nations. For case studies we looked at the Waco crisis with David Koresh and the Branch Davidians, and the move of South Africa from apartheid to a new constitution. I wrote a long essay on the conflict around the ordination of women in the Anglican Church of Canada, and how that differed from how that issue was managed in the Episcopal Church of the USA and the Church of England. We looked at the 1991 classic on negotiation called “Getting to Yes: Negotiating Agreement Without Giving In.” I learned that, while most of the time one tries to de-escalate a situation, on occasion one would actually escalate the conflict to force an issue. I got really good at conflict, and most of the time I “won”.

However, “winning” was sometimes actually a failure. One can resolve a conflict by overpowering the other side, but you may lose the other side as a brother or sister in Christ. Sometimes that cannot be helped, especially in cases of sexual misconduct where a party absolves themselves of all responsibility despite the preponderance of evidence. But most of the time it can be. 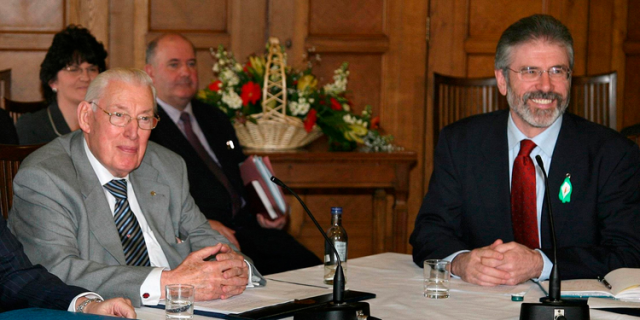 Ian Paisley and Gerry Adams after the Good Friday Agreement of 1998.

The Unbelievable Comes to Pass

In our time we have seen conflicts resolved and unresolved. We have had an uncomfortable peace in Northern Ireland since 1998. I thought the Troubles would never end, and some folks did their best to undo the Good Friday Agreement, but here we are, twenty-two years later. Growing up, did we ever think that the Iron Curtain would fall as peacefully as it did? And now most of the former Warsaw Pact nations are in NATO and the European Union. Some nations are not where we might like them to be. The war in Yugoslavia was contained, and even Greece and North Macedonia learned to live with each other. However, conflict continues – in the Middle East, between Israeli and Palestinian, between Saudis and Yemenis, in Iraq between Sunnis and Shiites, in Syria between Assad and his people, in Africa, in Myanmar, in Afghanistan, and so forth.

The point is, conflict is always present. If we allow it to, it will become destructive. But it does not have to be. We can find more peaceful ways to live. We can move from entrenched positions to overlapping interests. We can engage in discourse, and if all else fails, ask a disinterested third party to adjudicate it. As Churchill said, ‘Meeting jaw to jaw is better than war.’ This was misquoted by Harold Macmillan in 1954 as: “Jaw, jaw is better than war, war,” but the sentiment is the same. 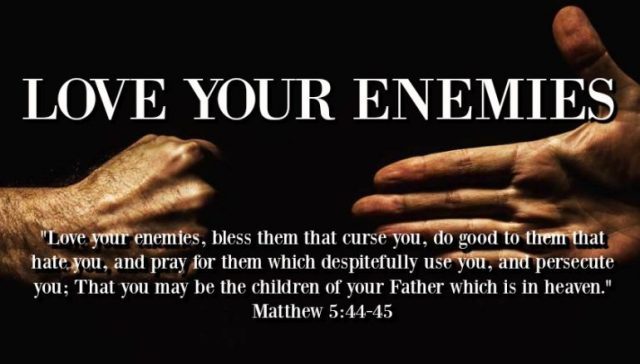 As Christians we are called not to be in conflict, but to be able to manage it with love and compassion. In the resolution of our differences we need to affirm the image of God in others and not be led into demonizing the other. As bizarre as it may seem, like Jesus we have a responsibility to our opponent and our oppressor, to love and to pray for our enemies.

It seems to me that knowing how to manage conflict in God’s way his is a key to evangelism. We can spread the seed, but it needs good soil in which to grow. By the way in which we deal with the difficult situations of life may people see our good works and give glory to God. May we be that rich soil into which the seed falls, so that it may grow abundantly.

The story of Esau and Jacob has a happy ending. Jacob, ever the trickster, returns to the Promised Land after many adventures in Syria and Iraq. He is still afraid of his brother, and sends him gifts. Then, as he approaches, he sends his flocks and large family before him, with him last of all, just in case he needs to skedaddle away. But it is all for nought – in chapter 33 we read, “But Esau ran to meet him, and embraced him, and fell on his neck and kissed him, and they wept.” Esau does not want or need the gifts, but takes them at Jacob’s insistence, and the two brothers go in peace. The next time we hear of them together is when they bury Isaac, their father. May we find peace and reconciliation in following in the footsteps of Jesus.

Canadian. Husband. Father. Christian. Recovering Settler. A priest of the Church of England, Diocese in Europe, on the island of Crete in Greece. More about me at https://www.linkedin.com/in/bruce-bryant-scott-4205501a/
View all posts by Bruce Bryant-Scott →
This entry was posted in Sermons and tagged Conflict, Conflict in the Church, Conflict Management, Conflict Resolution, Jacob and Esau. Bookmark the permalink.

5 Responses to Confessions of a Conflict Junkie