Do Not Be Afraid: An Easter Sermon for the Year of the Great Pandemic of 2020

A Sermon that was NOT preached at the Anglican Church of St Thomas, Kefalas,
in the regional municipality of Apokoronas, on the island of Crete, in Greece
on Easter Sunday, April 12, 2020, 11:00 am
because of the Great Pandemic of 2020.

“Behold, I tell you a mystery; we shall not all sleep, but we shall all be changed in a moment, in the twinkling of an eye, at the last trumpet. (I Corinthians 15: 51-52)
The trumpet shall sound, and the dead shall be raised incorruptible,
and we shall be changed. For this corruptible must put on incorruption
and this mortal must put on immortality. (I Corinthians 15: 52-53)
From Messiah by G. F. Handel. Philippe Sly: Bass-Baritone. Julian Wachner: Conductor. Trinity Wall Street Baroque Orchestra. Performed December 26 2015,
Trinity Church, Wall Street, New York City

“Do not be afraid; go and tell my brothers to go to Galilee; there they will see me.”Matthew 28.10

An Age of Anxiety

We live in a time when we are justified in being afraid.

Even if we personally are doing all right, the fear and concern across the globe is palpable. 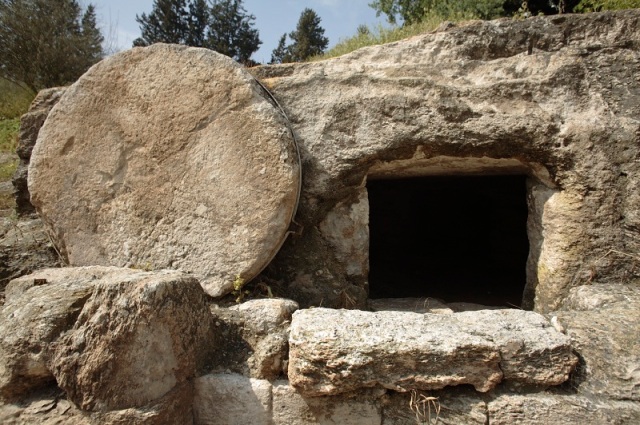 A tomb near Nazareth, Israel, dating from the first century. Similar to Christ’s tomb with the stone rolled over the entry.

“Do Not Be Afraid”

And in the midst of this, in what one wag has called “the season of Coronatide”, we hear the old Good News of the resurrection of Jesus. An angel at the empty tomb – a messenger from God – tells the two Marys:

“Do not be afraid; I know that you are looking for Jesus who was crucified. He is not here; for he has been raised, as he said. Come, see the place where he lay. Then go quickly and tell his disciples, ‘He has been raised from the dead, and indeed he is going ahead of you to Galilee; there you will see him.’ This is my message for you.”

And then, as if to underline it, Jesus himself appears to these women, and says to them:

“Greetings! Do not be afraid; go and tell my brothers to go to Galilee; there they will see me.”

The Destructive Power of Modern Skepticism

The resurrection of Jesus is not a rational, scientific proposition. It is a proposition of faith. Human beings do not die, and then come back to life – this must be admitted. So obviously the claim that Jesus rose from the dead, in a new transformed body, is an exceptional claim that does not fit our modern notions of scientific method, historical methodology, and repeatable results. So, if we want to be properly modern and skeptical, we can explain the resurrection away in naturalistic terms. For example:

Peter, having denied Christ, was so consumed with guilt that he found psychological release in projecting a vision of Jesus, which led him to believe that Jesus was risen from the dead. Thereby the crucified Jesus showed himself to be the living Jesus, so that Peter could once again apply to himself and this time with profound clarity God’s word of forgiveness present in Jesus’s work.” Peter’s experience was infectious in the early Christian community, and soon others, too, who did not share Peter’s trauma, also saw hallucinations of the Risen Lord. From William Lane Craig’s Critique of Lüdemann.

One cannot disprove these skeptical theories. However, there is a problem with all of them. They are rational, yes, but they fail to explain the power of Christianity. In the minds of modern skeptics the disciples are conspirators, fools, or hallucinators. However, we know them as  the founders of a faith that has somehow lasted for twenty centuries and inspired peoples and cultures around the world. How can this be?

The Power of Resurrection Hope

A pre-modern perspective, in which the world is shot through with the Divine, has no problem with the resurrection. Interestingly, a post-modern Christian perspective can accept the literal resurrection as well. Objective rationalism is seen as one narrative, and a very powerful one, but its supposed objection to resurrection is a category mistake. It is like asking what causes gravity. We might answer with Newtonian mechanics and Einsteinian Relativity, but these only address the “how” and not the “why”; we still do not have an understanding as to why the universe is the way it is. Faith might answer that something beyond the universe, which we might call metaphorically “The Creator” or “God” is somehow responsible, but this is an unproveable thesis – like the theory of the multiverse, or string theory. Likewise, when we acknowledge the resurrection of Jesus as a fact, we are doing so on the basis of faith.

3 For I handed on to you as of first importance what I in turn had received:
that Christ died for our sins in accordance with the scriptures,
4and that he was buried,
and that he was raised on the third day in accordance with the scriptures,
5and that he appeared to Cephas [i.e. Simon Peter],
then to the twelve.
6Then he appeared to more than five hundred brothers and sisters at one time,
most of whom are still alive, though some have died.
7Then he appeared to James,
then to all the apostles.
8Last of all, as to someone untimely born, he appeared also to me.
9For I am the least of the apostles,
unfit to be called an apostle, because I persecuted the church of God.

As well, of course, he appeared to the women at the tomb, including Mary Magdalene, as well as to the two disciples on the road to Emmaus.

These are a lot of people. Paul, in that letter to the Corinthians, is essentially saying, “Look, don’t just take my word for it, here are a whole bunch of other people who have also seen the resurrected Jesus.” While the resurrection accounts are diverse, there is enough commonality that the witnesses affirm the same thing, that Jesus had been resurrected. The resurrection of humanity was hoped for by most Jews at the time.  The unusual thing was that Jesus was raised first and alone, “the first fruits of those who have died” as Paul puts it later in Chapter 15. His resurrection was not expected. His death was thought to be the end, a complete failure. The death of Jesus on the cross did not have any meaning of sacrifice, ransom, debts being paid, dying for sins – that kind of thinking only came in the light of the resurrection. The Messiah was not supposed to die, so the thinking went, he was supposed to restore the Kingdom of Israel. But God had other plans that could only be understood in the context of the resurrection.

Christianity should not have carried on. It should have died shortly after Jesus died. The resurrection was a preposterous idea. Indeed, as the Romans in the first few centuries found, it was a subversive faith, disrespectful of the Emperor and Rome itself. It was, in our modern terms, a cult in tension with society. It was, as Nietzsche later observed, a faith of slaves, of weakness. The Romans persecuted the early church. But still, it persisted.

Indeed, it grew, so much so that by the time Constantine converted to Christianity in the early Fourth Century this perverse faith may have already have become the largest religion in the Empire. With the decriminalization of the Christian faith, and later its establishment as the official religion, Christian leaders were released from persecution, and gained powers that earlier Christians could only have dreamed of. This power was at times a corrupt force, and yet time and again it called emperors, kings, and princes to repentance.

When the church went down the wrong path, it constantly reformed itself.

Time and again faith in Jesus Christ and a knowledge of the faithfulness of Christ has spoken to peoples of every land and nation. It is not merely a faith of the elite or the opiate of the masses, but something which constantly works within people to change and transform themselves, and to hope for things that seem impossible, to which no reasonable person could aspire.

This is why I believe in the resurrection – because I have seen the same power which raised Jesus from the dead at work in so many of God’s people.

The Cross of Flowers 2020, decorated with flowers by David & Mary Hurley from Jan Lovell and Jo Cheslyn-Hall.

“Do Not Afraid: Go and Tell My Brothers to go to Galilee; There They Will See Me.”

On this Easter Sunday in “Coronatide”, let us not deny our justified fears, but let us not be overcome by them. Let us have hope that, in the midst of so much suffering and death, and for most of us, experiencing simple anxiety and boredom, that God is with us, and that the Creator of the Cosmos is making all things new.

As Twenty-First century people we are not normally blessed with resurrection appearances of Jesus, as the early disciples were. But we can go to our modern Galilees and see the resurrection in the good deeds of people around the world. We see it in the health care workers as they challenge the powers of sickness and death. We see it in the novel ways people are finding to connect with each other through technology. We see it in the kind deeds that people are doing for one another.

As the resurrection of Jesus empowered Mary Magdalene, the other Mary, and the disciples to spread the good news of God’s coming kingdom in Jesus of Nazareth, as it convinced them of the forgiveness of sins and raised them up to do more than they could ask or imagine, may we all be changed, and live the resurrection today.

Alleluia. Christ is risen.
He is risen indeed. Alleluia.

2 Responses to Do Not Be Afraid: An Easter Sermon for the Year of the Great Pandemic of 2020