Isaiah and His Kings (III)

Posted on December 9, 2019 by Bruce Bryant-Scott

Day Nine of “Through Advent with Isaiah”

A fairly constant refrain in Isaiah and the Deuteronomic History is calling Israel back to the worship of Yahweh alone. In Isaiah 2 we read

The haughtiness of the people is reflected in their wealth and in their idols. The books of Samuel and Kings rate kings according to three criteria – their being part of the House of David (which every ruler of the secessionist northern Kingdom of Israel fails, of course), whether or not they suppressed the worship of other gods and the idols representing them, and whether they centralized the worship of Yahweh alone in Jersualem.

Book of Isaiah says more about Hezekiah, King of Judah, than any other historical figure. II Kings says this about him:

1 In the third year of King Hoshea son of Elah of Israel, Hezekiah son of King Ahaz of Judah began to reign. 2He was twenty-five years old when he began to reign; he reigned for twenty-nine years in Jerusalem. His mother’s name was Abi daughter of Zechariah. 3He did what was right in the sight of the Lord just as his ancestor David had done. 4He removed the high places, broke down the pillars, and cut down the Asherah (the sacred pole). He broke in pieces the bronze serpent that Moses had made, for until those days the people of Israel had made offerings to it; it was called Nehushtan. 5He trusted in the Lord the God of Israel; so that there was no one like him among all the kings of Judah after him, or among those who were before him. 6For he held fast to the Lord; he did not depart from following him but kept the commandments that the Lord commanded Moses. 7The Lord was with him; wherever he went, he prospered. He rebelled against the king of Assyria and would not serve him. 8He attacked the Philistines as far as Gaza and its territory, from watch-tower to fortified city. 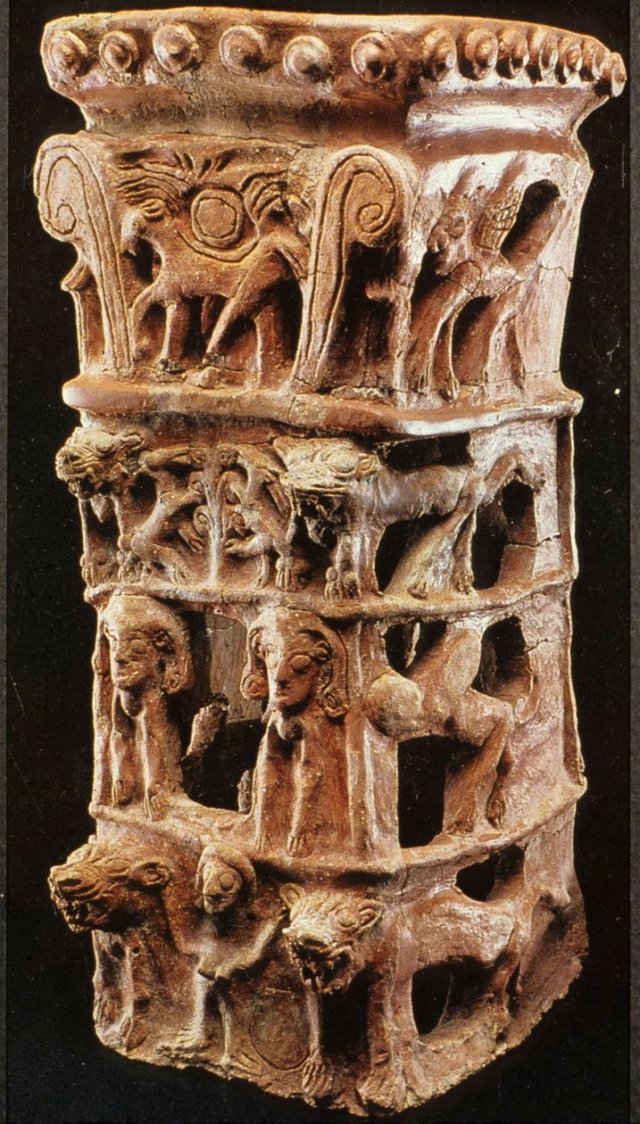 This four-tiered cult stand found at Tanaach is thought to represent Yahweh and Asherah, with each deity being depicted on alternating tiers. Note that on tier two, which is dedicated to Asherah, is the image of a living tree, often thought to be how the asherim as a cult symbol was expressed. Photo: © The Israel Museum, Jerusalem/Israel Antiquities Authority (photograph by Avraham Hay). From here.

Hezekiah is one of the few “good” kings of Judah, according to the author of Samuel & Kings. Hezekiah is the first king after Solomon of which it is said “he did what was right in the sight of the Lord just as his ancestor David had done.” The only other king who gets this high honour is Josiah. 2 Chronicles 17.3 does describe the earlier King Jehoshaphat this way, but 1 Kings 22 does not do so because, “the high places were not taken away, and the people still sacrificed and offered incense on the high places. Jehoshaphat also made peace with the king of Israel.” Hezekiah is better than his forebear because he “removed the high places, broke down the pillars, and cut down the Asherah/sacred pole.” He also destroyed a bronze serpent in the Temple because people were apparently worshiping it. Because of this, the author says, “there was no one like him among all the kings of Judah after him, or among those who were before him.”

The high places were undoubtedly places of the worship of Yahweh and probably other gods. Indeed, it appears that in some parts of Israel and Judah Yahweh was worshiped with the female God Asherah. The inscription and imagery from Kuntillet Ajrud in Sinai suggests as much. 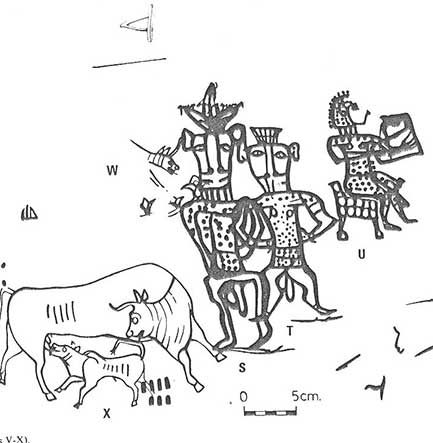 A reproduction of a drawing on a large water jar dated to circa 925 BCE to 875 BCE, found in Kuntillet Ajrud, a site in northeast Sinai not far from the modern border of Israel and Egypt. It is immediately below an inscription in archaic Hebrew stating, “”I have blessed you by Yahweh of Samaria and [his] Asherah”).

Many scholars suppose that the worship of Yahweh as the one and only God was actually a development in Israelite religion, one that for most of the monarchy was contested by some form of polytheism in which Yahweh was one god among others – perhaps the supreme one, but still one of several. While we cannot discount the idea that David and some of his forebears were monotheistic, the reality is that Solomon set up altars for the gods of his wives, and the northern Kingdom of Israel felt justified in setting up a centre in Samaria in which Yahweh was worshiped along with Canaanite gods such as Ba’al. From the perspective of the Deuteronomic History in the late 7th century BCE ,and the final editors of the Hebrew Bible in the fifth and fourth centuries BCE, this was regarded as violations of the first two of the Ten Commandments. In historical reality it may have actually been a process in which the true nature of Yahweh was perceived. As archaeologist William Dever in 1984 noted,

Trees and sacred poles were associated with Asherah; libations may have been poured on it. We are told that Hezekiah’s son, Manasseh, set up a pole and an image for her in the Jerusalem Temple (2 Kings 21: 3, 7). His grandson, King Josiah, cleansed the Temple of the idols and Asherah pole.

Hezekiah comes across in 2 Kings as an ideal king. However, the Book of Isaiah is more ambivalent. We’ll get to this, chapters 36 to 39, tomorrow.

Canadian. Husband. Father. Christian. Recovering Settler. A priest of the Church of England, Diocese in Europe, on the island of Crete in Greece. More about me at https://www.linkedin.com/in/bruce-bryant-scott-4205501a/
View all posts by Bruce Bryant-Scott →
This entry was posted in Advent, Isaiah and tagged Asherah, Development of Monotheism, Isaiah 2.12-18, Kings of Judah. Bookmark the permalink.