A sermon preached on the Second Sunday Before Lent at the Anglican Church of St. Thomas the Apostle, Kefalas, Crete, Greece, 11:00 am on Feb 24, 2018. 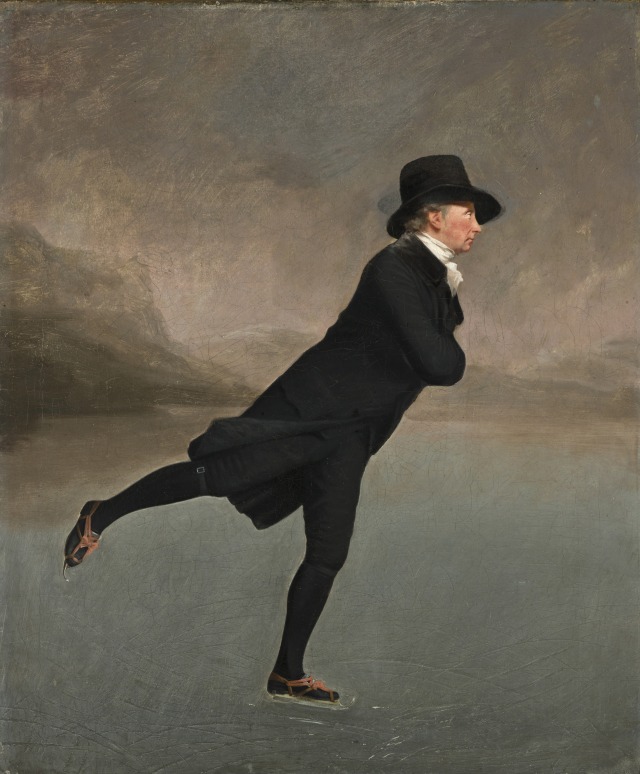 “The Reverend Robert Walker Skating on Duddingston Loch” (also known as “The Skating Minister” by Henry Raeburn, circa 1790. National Gallery of Scotland.

Once upon a time there was a Church of Scotland minister who had to skate to get to his church. He lived in a manse that was some ways away from the church building itself. He woke up one morning and there was snow all over the ground, accompanied by a strong wind that set up tall drifts alternating with clear icy patches. He knew that there was no way his poor horse would be able to get through it. However, he noted that the river nearby, which ran by both the church and the manse, was clear. Having been a bit of an athlete in his day he strapped on his skates, rather primitive things by today’s standards, but good enough. He got down to the river and in a matter of a few minutes he had skated the distance and went inside. This created a problem for the elders of the church, as it was forbidden to play sports on the Sabbath, and ice-skating clearly was a sport. The elders demanded to meet with the young minister after the service, and while he waited outside they debated among themselves whether the man had broken the Sabbath and could continue. Finally, they agreed on a question to pose to him, a query which would settle the issue. They brought him in and said, “Did you enjoy it?”

This morning I want to talk about obedience and desire.

Obedience to God is always presented in the Bible as a good thing. Obedience in the Hebrew scriptures is rewarded with land and sheep and long life. Jesus is the example of obedience in that he carries out his Father’s will, even to death, even to death on a cross. In the Garden of Gethsemane he prays that he might be spared the results of such obedience, of being bound to death in order to overcome it, but his final wish is not his personal will to avoid pain and suffering, but that “thy will be done”.

Disobedience is not a good thing. In the Hebrew scriptures disobedience is punished with invasions and lives cut short, with exile and the loss of land. Adam and Eve are the examples of disobedience, given just one rule – do not eat of the tree of the knowledge of good and evil – and they go and mess that up. While we do not read this literally, it is an accurate description of human depravity – give us a rule and we’ll be predisposed to break it; show us what is good for us, and we’ll take the option that shows independence of mind, no matter the downside.

And that creates the need for God’s intervention. Because independence of mind no matter the downside leads to death, whether it be the living death of discord and conflict, or looming death from total war and ecological disaster. And so God enters into this world in the person of Jesus of Nazareth, the human united with the divine, the finite and the infinite paradoxically made one, and descends into the void of sin and death. Being finite he dies, but being infinite he overflows it and is not overcome. He rises to new life, restoring and transforming our humanity. And we who are in Christ become obedient to God’s will not out of some abstract command to do something, but out of love, out of desire.

Many Christians are uncomfortable with desire, seeing in it something erotic and dangerous, a means by which to manipulate others, or something that is gross and physical. And yet desire is good. We see in the reading from Genesis that the primordial human, Adam, neither male nor female, has a desire for companionship, but cannot find it among the animals. While perhaps surprising to those of us who are quite content to live alone with cats and dogs, it again speaks a non-literal truth, that we humans do need each other. When that strange, God-inflated human is transformed into the binaries of male and female it speaks to the fact that we are not complete without each other, and that our myriad differences are all God-given, and that only in the collective of humanity do we find the image of God. And in the story of the one made two we hear how one half of humanity desires the other. In that desire we see the desire for completion, a reflection of the human desire for God.

I believe that we are here because of love, in this place and in this worship, because of desire for God and our desire for community. It’s a rare thing in today’s instrumental world, where we are seen as means to ends, reduced to being consumers and producers, objects of surveillance that is packaged, aggregated, and sold to online retailers and political parties. In pure desire we desire each other, our souls and bodies, and offer them up to each other and to God, in what the BCP Collect for Peace describes as “whose service is perfect freedom”. We are not the wind and the water, which mindlessly obey the lord of all creation. We obey out of loving desire, inspired by the Holy Spirit to become like Christ as he was on Earth and as he is now.

But of course, as with any good thing, desire can be abused, as can obedience. The conference taking place this weekend in Rome between the Pope and several hundred bishops from 130 countries from around the world is addressing the crisis of sexual abuse by Catholic clergy. I have personally dealt with many complaints of sexual abuse within the Anglican Church of Canada and I have, on behalf of the Church, offered to cover professional counseling and significant financial compensation for victims. I have been involved in disciplining the perpetrators and dealing with the devastating fallout in the parishes where they served. So do not get me wrong – I am not naïve about what inappropriate desire can do. Loving desire, whether towards God or another human being, whether sexual or non-sexual, will always be filled with trust, honour, dignity, respect, tenderness, offering, and meaningful consent. Or, as Paul puts it in his First Letter to the Corinthians:

Love is patient; love is kind; love is not envious or boastful or arrogant or rude. It does not insist on its own way; it is not irritable or resentful; it does not rejoice in wrongdoing, but rejoices in the truth. It bears all things, believes all things, hopes all things, endures all things.

This kind of love, this kind of pure desire, is from God and of God, but is also so very human.

So my brothers and sisters, let us be passionate Christians, obedient to the will of God and considerate of the wishes of others not out of compulsion or the dread of consequences, but because of our Spirit-filled desire for God and for the image of God that we find in community with others. Let us be very careful, taking seriously the trust given to us, so that we might like Christ follow in the path of serving and not focusing on being served. Let us be bold in Christ, and not ashamed. And when our lives are over and we stand before the judgement of God, and we are asked, “Did you enjoy it?”, may our response be, “Yes, my Lord, we did!”

Canadian. Husband. Father. Christian. Recovering Settler. A priest of the Church of England, Diocese in Europe, on the island of Crete in Greece.
View all posts by Bruce Bryant-Scott →
This entry was posted in Sermons and tagged Desire and Obedience. Bookmark the permalink.