Lessons from the Great War: Some Questions

Posted on January 9, 2019 by Bruce Bryant-Scott 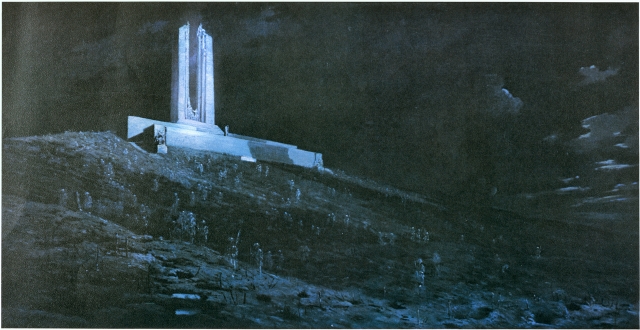 The Ghosts of Vimy Ridge painted by Australian artist William Longstaff c. 1929. It hangs in the Railway Committee Room of the Hose of Commons in the centre block of the Parliament Buildings, Ottawa.

If you know me you will know that I am a great reader of history books. I have spent many hours reading about wars and conflicts around the world. Ever since the approach of the 100th anniversary of the beginning of the Great War – what is now known as World War I – I’ve been mulling over a number of issues related to them. Of course, it is more than four years later, and we have now marked the 100th Anniversary of the end of that war. Most people look back at it as a remarkable waste of humanity, an unresolved mess that only led to the even worse Second World War. It was a disillusioning time when the vision of unending progress was shown to be false, and people became skeptical of the ability of leaders to manage diplomacy or armed conflict.

Have we learned anything? I suggest that there are some important lessons to be learned from the events of 100 years ago, but we are in danger of forgetting them. To know what these lessons are, though, we need to ask a few basic questions. In the coming weeks I will use these questions as jumping off points for my thoughts.

First, what were the causes of the First World War? By cause I do not mean the presenting causes, beginning with the assassination in Sarajevo, and ending with the UK deciding it needed to defend the neutrality of Belgium, but rather the underlying causes – trajectories of policy, errors of judgment, long-held beliefs, prejudices, and so forth.  I want to talk about those.

Second, why did the nations persist in the war instead of reaching some kind of peace, particularly when the battles seemed to resolve little and the costs were so high?

Third, what caused the end of the war?  All the contemporary accounts describe the participants as being surprised at how quickly the end came. Also, was there a winner?

Fourth, how is the First World War connected and not connected to the Second World War?

Senior Officers of the US, UK, and Greek forces at the Remembrance Day Service 2018 at the Souda Bay War Cemetery.

Canadian. Husband. Father. Christian. Recovering Settler. A priest of the Church of England, Diocese in Europe, on the island of Crete in Greece.
View all posts by Bruce Bryant-Scott →
This entry was posted in War and tagged First World War. Bookmark the permalink.

1 Response to Lessons from the Great War: Some Questions