Some Frequently Asked Questions about Crete and Greece

Posted on January 1, 2019 by Bruce Bryant-Scott 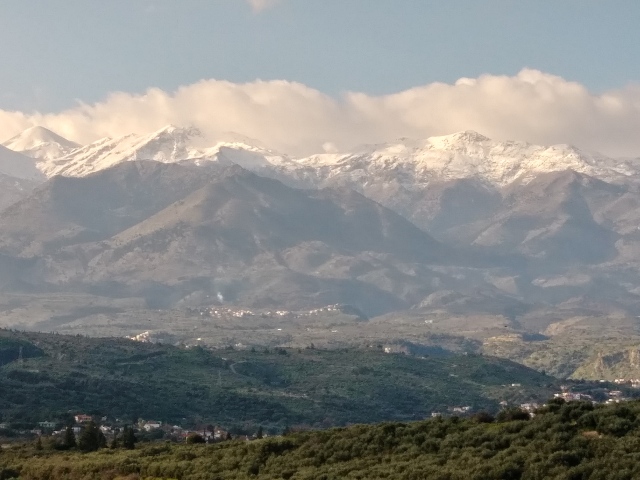 The White Mountains (Λευκά Όρη) of eastern Crete from above Kalyves on Christmas Day, 2018

My friend Michael Povey  a retired Episcopalian priest living in Florida who we got to know in Cambridge Massachusetts in 2002-2003, wrote,

Please, one of these days, tell us all a bit about Crete. How far is it from mainland Greece, what’s the population, how big is it (e.g. as compared with one of the Maritimes, or the smaller U.S. States).

Well, always seeking to please people, here are some answers to his and other folk’s questions.

1. Isn’t that place dangerous? I thought the island was divided.

You are thinking of Cyprus, an island that is 700 km east of us, and which is closer to Lebanon and Syria than Greece. Cyprus is its own nation, having gained independence from the United Kingdom in 1960, who took it from the Ottoman Empire in 1880. The majority of the people on Cyprus do speak Greek and are Greek Orthodox, but there is a sizeable Turkish population as well. The modern nation of Turkey invaded Cyprus in 1974 when the Cypriot Greeks, conspiring with the military junta then in power in Greece, sought to join the two countries. The invasion pretty much took the northern 40% of the island, and the Turks then set up an independent government in that part of Cyprus which only they recognise. Crete, on the other hand, became effectively autonomous in 1898 after a rebellion and intervention by the Great Powers (i.e. the UK, France, Italy, and Russia). It formally joined Greece in 1913, and the Muslim population was expelled 1922-1924 after the Catastrophe of the war between Greece and Turkey.  Over a million Orthodox Christians were expelled from Turkey, and some 300,000 Muslims from Greece, in an early version of diplomatic ethnic cleansing. The population is now relatively homogeneous, being almost entirely Orthodox Greeks. The Nazis invaded and conquered in 1941 and stayed until 1945. So, while the history of Crete has been violent and calamitous, it has been relatively peaceful here since after the Second World War.

2. How far is it from the mainland?
It’s a fair distance from the mainland. By boat, from Piraeus to Souda (respectively, the ports of Athens and Chania on Crete) it is 273 km, or 147 nautical miles, which makes for a nine hour ferry ride. We haven’t done that yet – we’ve always take the plane from the Chania airport (CHQ) to Athens (ATH); both airports are a fair distance outside of the cities they serve. By air it is 275 km or 171 miles, and about an hour in the air. The shortest distance between the mainland and the island is between the Malea peninsula in the southeast Peloponnese and the Rodopu peninsula in north-west Crete, about 54 nautical miles or 100 km. However, only someone with a private boat could make that trip, as both peninsulas are relatively unserved by roads and public transport.

3. How big is the island?
By Mediterranean standards it’s pretty big. As Wikipedia says, it is “the fifth largest island in the Mediterranean Sea, after Sicily, Sardinia, Cyprus, and Corsica.” The article then goes on to say, “The island has an elongated shape: it spans 260 km (160 mi) from east to west, is 60 km (37 mi) at its widest point, and narrows to as little as 12 km (7.5 mi) (close to Ierapetra). Crete covers an area of 8,336 km2 (3,219 sq mi), with a coastline of 1,046 km (650 mi)”. Compared with Vancouver Island it is roughly half as long, half as wide, and thus has about a quarter of the area. It’s somewhat longer and larger than Long Island or Prince Edward Island. It has mountains that are taller than the Olympics in Washington State, and taller than anything on Vancouver Island. The island is young geologically, as can be seen in the rocky terrain that has never been smoothed over by an Ice Age and has not had time to erode from other natural processes.

4. How many people live there?
According to Wikipedia, the population in 2011 was 623,065. During the summer, that undoubtedly goes up with the vast numbers of tourists looking for warm and sunny beaches. By comparison, Vancouver Island with four times as much space has 775,347, so the island has a more dense population that that BC isle; Long Island has 7,869,820 (mainly due to Queens and Brooklyn) and PEI has a mere 143,000. The population of Crete is split evenly between those who live in cities and those of us in the rural areas.  Greater Chania (pronunced “Haniá”), which is 35 minutes by car from us in Gavalohori, has around 108,000 inhabitants, whereas the capital city Iraklio (or Heraklion, as it is often transliterated into English), just two hours east of us, has 174,000. In many ways the island is a series of villages and towns with four majour urban centres, separated by olive groves, sheep, goats, and mountains.

If you have any questions, let me know.

Canadian. Husband. Father. Christian. Recovering Settler. A priest of the Church of England, Diocese in Europe, on the island of Crete in Greece. More about me at https://www.linkedin.com/in/bruce-bryant-scott-4205501a/
View all posts by Bruce Bryant-Scott →
This entry was posted in Crete, Greece. Bookmark the permalink.