This is a continuation of the second part of my dissertation on the theological legacy of the Indian Residential Schools, Unsettling Theology.

The indigenous peoples of what is now known as North and South America have lived there since “time immemorial”.[1] Archeological evidence suggests that earliest ancestors of the indigenous peoples arrived no later than 11,000 years before the present, and mitochondrial DNA evidence suggests it was probably more like 25,000 years ago, and quite possibly as much as 43,000 years ago.[2] Presumably there was not just one mass migration, but several waves that took place over many centuries, facilitated by the Beringia land bridge between Siberia and Alaska, created by the lowering of sea level during the Ice Ages. The last migration is thought to be that of the Inuit, who came out of Western Alaska and spread into Northern Alaska, Northern Canada, and Greenland from c. 200 to 1300; in this case they were replacing the earlier Dorset Culture.

South of the Inuit are the First Nations, whose ancestors developed over thousands of years into many peoples or nations with distinct cultures and languages. The variety of these languages and culture was and is huge; for example, the linguistic diversity of indigenous languages in what now called British Columbia is greater than that of the languages in modern Europe. The Pueblo peoples in what is now the US Southwest have fifteen languages in three utterly different language families. 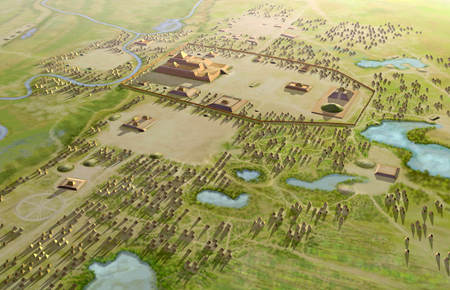 In some places, such as the Mayan Peninsula, in Mexico, and in Peru, sophisticated cultures with forms of writing and architecture arose, namely the Mayan, the Aztec, and the Inca. In North America, on the east bank of the Mississippi, not far from where St. Louis was eventually built, a city now known as Cahokia was established between 600 and 1400, with some 40,000 inhabitants at its peak. The city of Tenochitlan (pre-conquest Mexico City) in 1520 had 20,000 people, which at that time made it bigger than Paris, Europe’s largest metropolis; by all accounts it was also cleaner and more livable than any European city. Many of the indigenous peoples were hunter-gathers, but just as many were sedentary, building cities, or travelling on their ancestral territories between winter and summer settlements. Social organization was diverse, ranging from small migratory tribes based on extended families to highly complex groups with hierarchies and clans. The nations had a variety of cosmologies and spiritual customs, and in some cultures a religious caste emerged. Warfare between adjacent peoples was common, and captives were often turned into slaves. Across the Americas the indigenous peoples transformed their territories through fire, irrigation, and the building of mounds and terraces.[3]

All of this belies the tendency by Europeans and European settlers until very recently to homogenize and discount the complexity and considerable achievements of the indigenous peoples. The story we tell of the “Indians” of the Americas is that they were ignorant savages, stuck in the stone age, scattered across the continents and islands in small nomadic groups. The story runs that they were peoples of simple beliefs and had no idea how to exploit the land and build up civilizations. The Hollywood image of Indians is of hostile enemies standing in the way of progress, or of noble savages in tune with the environment but slowly being ground down and assimilated by European culture. It is assumed that they have no history prior to contact in 1492, and that their oral traditions are myths and “old wives tales”. Whatever virtues they might have had, they were clearly inferior to the “white peoples” from Spain, Portugal, France, and Britain.

The first documented attempt by Europeans to settle in the Americas was that of Icelanders led by Leif Ericson around 1000[4]. The Saga of the Greenlanders and the Saga of Erik the Red describes the discovery and settlement of Vinland at a place named Leifsbudir. In the 1960s two Norwegian archeologists discovered a Viking settlement at the north end of the island of Newfoundland in what is now called L’anse aux Meadows; it is thought to be the site of Leifsbudir, or a depot for another colony further south that has not yet been identified. Iceland and the recently settled Greenland was in the process of accepting the Christian faith, so it is possible that Snorri Thorfinnsson, the first child born in the settlement, was also the first person baptized in the Americas.

However, this first European settlement was not successful. Contact with the local indigenous people, called Skraelings, was limited, but involved some bartering. Some of the settlers were aggressive, as one might expect from Vikings, and the Sagas record incidents of unprovoked violence that led to killings of the locals. They also record the exchange of milk products with the Skraelings, which, because they were lactose intolerant, led to them becoming ill and thinking that they were poisoned. In the end they attacked the Viking settlement, and the colonists retreated to Greenland and Iceland. Settlements in Greenland were more successful, but contact with the Inuit was limited, and the Greenlanders tried to replicate their Scandanavian society and did not adopt the locally-adapted ways of the indigenous. The settlements on Greenland died out in the 14th and early 15th centuries, and the colony in Vinland was forgotten by the rest of Europe.

[1] Time immemorial is an English legal phrase which means “Time whereof the Memory of Man runneth not to the contrary” (OED, cited from 1832). It is a phrase that in Canada is frequently used to describe the ancient roots of the indigenous peoples in the land, as contrasted with the historical, documented arrival of all other peoples.

Canadian. Husband. Father. Christian. Recovering Settler. A priest of the Church of England, Diocese in Europe, on the island of Crete in Greece. More about me at https://www.linkedin.com/in/bruce-bryant-scott-4205501a/
View all posts by Bruce Bryant-Scott →
This entry was posted in Canadian Issues, Unsettling Theology and tagged Cahokia, First Nations, Unsettling Theology, Vikings in Canada. Bookmark the permalink.