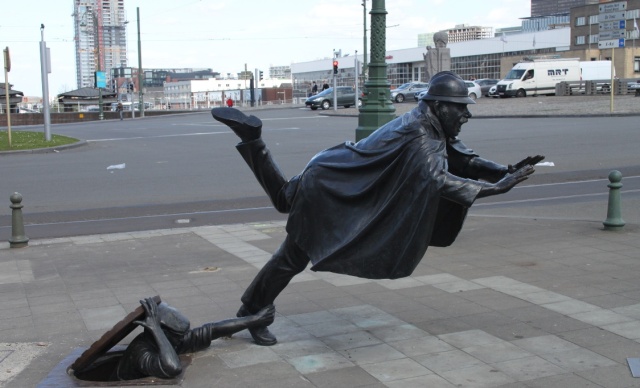 Paul in today’s second reading from the Daily Office Lectionary continues to struggle with God’s justice. While committed to the idea that God is just, he also is dealing with the idea that God is in control. Indeed, it is quite clear that in most of the Hebrew Bible that God favours Israel, giving to the Twelve tribes the Promised Land, giving the Torah at Sinai, the covenant with David, and repeatedly delivering it from destruction. But it is also clear that God can chastise Israel, through the words of the prophets, through disease, weather, and foreign armies. But if God is both hardening the hearts of some and bestowing grace and the Spirit on others, is that fair? And if God is hardening hearts, is it fair that the people then pay the penalty of their death and judgement before the throne of God?

Paul’s first strategy is the same as that of God speaking out of the whirlwind to Job: Who are you to question God’s judgement? Does the creator not have rights over their creation?

But who indeed are you, a human being, to argue with God? Will what is moulded say to the one who moulds it, ‘Why have you made me like this?’ Has the potter no right over the clay, to make out of the same lump one object for special use and another for ordinary use?

Then Paul argues that God has actually been quite patient with those who are perverse and Godless.

What if God, desiring to show his wrath and to make known his power, has endured with much patience the objects of wrath that are made for destruction;

Then he shifts in the same sentence to emphasise the glory God’s grace to those who have faith, which shows his mercy and compassion. He quotes Hosea and Isaiah:

and what if he has done so in order to make known the riches of his glory for the objects of mercy, which he has prepared beforehand for glory— including us whom he has called, not from the Jews only but also from the Gentiles? As indeed he says in Hosea,‘Those who were not my people I will call “my people”,
and her who was not beloved I will call “beloved”. ’ ‘And in the very place where it was said to them, “You are not my people”,
there they shall be called children of the living God.’
And Isaiah cries out concerning Israel, ‘Though the number of the children of Israel were like the sand of the sea, only a remnant of them will be saved; for the Lord will execute his sentence on the earth quickly and decisively.’ And as Isaiah predicted,‘If the Lord of hosts had not left survivors to us,
we would have fared like Sodom
and been made like Gomorrah.’

Paul probably did not believe that many people would escape the wrath of God. People would be saved on the basis of their faithfulness. I don’t believe that Paul believes that Jews necessarily had to believe in Jesus in order to have a righteous faith, but he probably also believed that it would be better for faithful Jews to accept Jesus as Messiah, as he had. Gentiles, on the other hand, could only be saved on the basis of faith in Christ.

What then are we to say? Gentiles, who did not strive for righteousness, have attained it, that is, righteousness through faith; but Israel, who did strive for the righteousness that is based on the law, did not succeed in fulfilling that law. Why not? Because they did not strive for it on the basis of faith, but as if it were based on works. They have stumbled over the stumbling-stone, as it is written,‘See, I am laying in Zion a stone that will make people stumble,
a rock that will make them fall,
and whoever believes in him will not be put to shame.’

I think in the above paragraph the words “Gentiles” and Jews” should be read with the implicit modifier “some”. What is the stumbling block? Paul appears to be quoting from memory a passage from Isaiah, but it is not clear if it is Isaiah 8.14 or 28.16. Interestingly almost the same form of quotation shows up in 1 Peter 2.6; Jewett in his commentary suggests that Pauline preaching was the source for the author of the later letter attributed to Peter. In Isaiah the stumbling block is clearly Messianic, and Paul picks up on that. In First Corinthians 1.22-24 Paul says,

For Jews demand signs and Greeks desire wisdom, but we proclaim Christ crucified, a stumbling-block to Jews and foolishness to Gentiles, but to those who are the called, both Jews and Greeks, Christ the power of God and the wisdom of God.

The reason Paul thinks most Jews reject Jesus as Messiah is because they are appalled by the idea that not only was the Messiah crucified, but he was supposed to die “for us in accordance with the scriptures”; Paul probably thought that way himself. In Romans the crucified Messiah continues to be a stumbling block – although in later chapters of the letter Paul states that despite this God will honour his promises to Israel. Now, a stumbling block in Greek is “skandalon” and our word “scandal” comes from that. The death of Jesus is both a stumbling block and a scandal.

While I acknowledge the power of God, I am also committed to assume that God is just. I hesitate to think that God would allow others to fall into error just so others saved by his grace might be grateful for God’s mercy on them and not those whose hearts had been hardened. It creates the image of God as a puppet master, where we have the illusion of free will and a righteous faith, but its all just the divine playing with clay.

So what do we say? Well, as I’ve said before, the “wrath of God” can simply be seen as what happens to people who pursue the violent exploitation of others; actions have consequences. Belief in the judgement of the wicked is a way for those who suffer to believe that God will bring those consequences to bear after death, if not in life, just as resurrection to life is a belief that God will redress the suffering with glory and feasting after death, if not in life. How that belief actually is actually fulfilled by the divine is something that can probably not be put into anything other than metaphors and images. In this case, faith is not only hope in things unseen, but in things unutterable, ineffable, and unseeable.

The divine is shown less in “wrath” and more in the solidarity of Christ in suffering with humanity. Christ emptying himself out as a servant, obedient even unto death on a cross, poses a question to us: what kind of a servant are we? What are we willing to let go of in service to our neighbour? What are we stumbling over?

Canadian. Husband. Father. Christian. Recovering Settler. A priest of the Church of England, Diocese in Europe, on the island of Crete in Greece. More about me at https://www.linkedin.com/in/bruce-bryant-scott-4205501a/
View all posts by Bruce Bryant-Scott →
This entry was posted in Lent and tagged Divine Justice, Romans 9.19-33, Stumbling Block. Bookmark the permalink.