Day Twenty-Three of An Advent Calendar: The Peaceable Kingdom 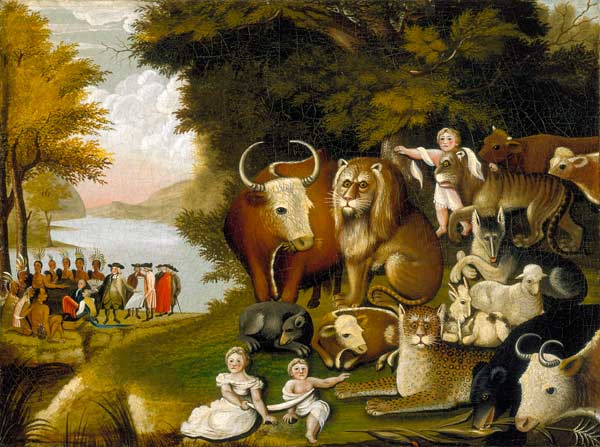 The reading from Isaiah and the reading from Revelation both deal with the reign of the messiah, the anointed one of God. Isaiah’s is the easier one to understand in some ways. It describes the people of Israel after they have undergone a severe trial, in which all the corrupt leaders and their followers are swept away, and only a holy remnant is left. The metaphor of a stump is used, and a shoot comes out of it to restore the Davidic monarchy. The spirit of Yahweh is with this king, and his reign will be righteous and just. A peaceable kingdom is described in which carnivorous animals become vegetarians, and wild animals like wolves, leopards, and lions are tame enough to be led by small children. Snakes become unsnakey, and are playthings for children.

This passage influenced later messianic expectations. The messiah would have to be a descendant of David and both infancy narratives in Matthew and Luke have genealogies making that claim. The baptism narratives all have the Holy Spirit descending upon Jesus.

The early Christians believed in two comings of Jesus; some aspects of the Isaiah readings are attributed to the second coming. The Son of Man is to come to judge the quick and the dead, and as we read some days ago, “with the breath of his lips he shall kill the wicked”, as we heard from 2 Thessalonians.

The passage from Revelation is also about the Second Coming. Paul, in 1 Corinthians 15, also refers to the reign of Jesus (I’ve put in letters to indicate the sequence of events):

(a) But in fact Christ has been raised from the dead, the first fruits of those who have died . . . But each in his own order: Christ the first fruits,
(b) then at his coming those who belong to Christ.
(e) Then comes the end, when he hands over the kingdom to God the Father, after
(c) he has destroyed every ruler and every authority and power. For he must reign until he has put all his enemies under his feet.
(d) The last enemy to be destroyed is death. For ‘God has put all things in subjection under his feet.’ . . .
(e) When all things are subjected to him, then the Son himself will also be subjected to the one who put all things in subjection under him,
(f) so that God may be all in all.

This is one chronology of the end time. Revelation is another, and while people have tried to harmonize this and other passages, such as Mark 13 and some of the passages we’ve seen already this Advent from 1 & 2 Peter, 1 & 2 Thessalonians, and Jude, I think that while they all come from the same basic inspiration it is hard to make them cohere well.

Revelation 20 imagines Christ reigning for a thousand years, a vision which gives rise to a variety of millenarianisms. As I have sometimes said in sermons, time in Revelation is a funny thing. A passage can be seen to refer to things that have already happened, or are happening now, or will happen in the future, or some combination of these. Thus Christ’s reign can be seen as something yet to come, or something that is already taking place on earth in the hearts and minds of the faithful. I suspect is it a both/and kind of thing.

Revelation 20 does not describe what happens in the 1000 years, and whether that reign carries on after Satan is finally defeated, or whether something else happens. Revelation 20-21 might be read as a description of that reign, or it might be read as an event that takes place after the millennial reign. If we follow the chronology in 1 Corinthians 15 the reign of Christ appears to be succeeded by something else, when “God becomes all in all”. IS this Revelation 20-21, the peaceable kingdom described by Isaiah which follows the reign of the Son of Man? Because time overlaps and is confusing in Revelation, I am not sure one can come up with a definitive answer and chronology that relates it to 1 Corinthians 15, and in any case, it may well be using words to describe that which is beyond words.

The vision of the Messianic reign and the Peaceable Kingdom is an inspiring one. It is something which we as Christians can work for, and act as thought it has already arrived, knowing that we will not enjoy the fullness of it in this life.

He shall not judge by what his eyes see,
or decide by what his ears hear; but with righteousness he shall judge the poor,
and decide with equity for the meek of the earth;he shall strike the earth with the rod of his mouth,
and with the breath of his lips he shall kill the wicked. Righteousness shall be the belt around his waist,
and faithfulness the belt around his loins.

The wolf shall live with the lamb,
the leopard shall lie down with the kid,the calf and the lion and the fatling together,
and a little child shall lead them. The cow and the bear shall graze,
their young shall lie down together;
and the lion shall eat straw like the ox. The nursing child shall play over the hole of the asp,
and the weaned child shall put its hand on the adder’s den. They will not hurt or destroy
on all my holy mountain;for the earth will be full of the knowledge of the Lord
as the waters cover the sea.

Revelation 20.1–10
Then I saw an angel coming down from heaven, holding in his hand the key to the bottomless pit and a great chain. He seized the dragon, that ancient serpent, who is the Devil and Satan, and bound him for a thousand years, and threw him into the pit, and locked and sealed it over him, so that he would deceive the nations no more, until the thousand years were ended. After that he must be let out for a little while.

Then I saw thrones, and those seated on them were given authority to judge. I also saw the souls of those who had been beheaded for their testimony to Jesus and for the word of God. They had not worshipped the beast or its image and had not received its mark on their foreheads or their hands. They came to life and reigned with Christ for a thousand years. (The rest of the dead did not come to life until the thousand years were ended.) This is the first resurrection. Blessed and holy are those who share in the first resurrection. Over these the second death has no power, but they will be priests of God and of Christ, and they will reign with him for a thousand years.

When the thousand years are ended, Satan will be released from his prison and will come out to deceive the nations at the four corners of the earth, Gog and Magog, in order to gather them for battle; they are as numerous as the sands of the sea. They marched up over the breadth of the earth and surrounded the camp of the saints and the beloved city. And fire came down from heaven and consumed them. And the devil who had deceived them was thrown into the lake of fire and sulphur, where the beast and the false prophet were, and they will be tormented day and night for ever and ever.

‘If I testify about myself, my testimony is not true. There is another who testifies on my behalf, and I know that his testimony to me is true. You sent messengers to John, and he testified to the truth. Not that I accept such human testimony, but I say these things so that you may be saved. He was a burning and shining lamp, and you were willing to rejoice for a while in his light. But I have a testimony greater than John’s. The works that the Father has given me to complete, the very works that I am doing, testify on my behalf that the Father has sent me. And the Father who sent me has himself testified on my behalf. You have never heard his voice or seen his form, and you do not have his word abiding in you, because you do not believe him whom he has sent.

‘You search the scriptures because you think that in them you have eternal life; and it is they that testify on my behalf. Yet you refuse to come to me to have life. I do not accept glory from human beings. But I know that you do not have the love of God in you. I have come in my Father’s name, and you do not accept me; if another comes in his own name, you will accept him. How can you believe when you accept glory from one another and do not seek the glory that comes from the one who alone is God? Do not think that I will accuse you before the Father; your accuser is Moses, on whom you have set your hope. If you believed Moses, you would believe me, for he wrote about me. But if you do not believe what he wrote, how will you believe what I say?’

Canadian. Husband. Father. Christian. Recovering Settler. A priest of the Church of England, Diocese in Europe, on the island of Crete in Greece. More about me at https://www.linkedin.com/in/bruce-bryant-scott-4205501a/
View all posts by Bruce Bryant-Scott →
This entry was posted in Advent, Uncategorized and tagged Eschatology, Isaiah 11, Peaceable Kingdom, Revelation 20. Bookmark the permalink.