Day Twenty of An Advent Calendar: From Poly to Mono 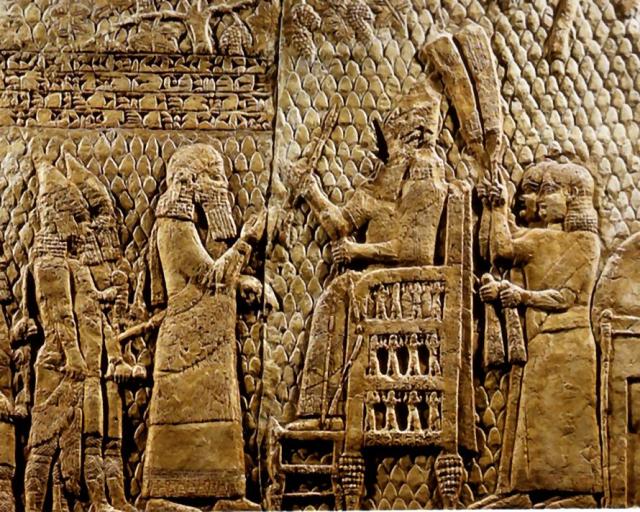 King Sennacherib and his crown prince Arda-Mullissi after the battle of Lachish in 701 BC. From the palace at Nineveh.

Once upon a time the God of Israel was but one God among many. That God’s name in Hebrew was יהוה, which was probably pronounced “Yahweh”. In the time of David, Solomon, and later Isaiah, Jeremiah, and Ezekiel, the people of Israel called their God by that name, but in the centuries immediately before Jesus’s time pious Jews began to consider it too holy to say, and so they started saying אֲדֹנָי‎, adonai or “My Lords”. This tradition was carried over into the Septuagint, where יהוה is translated as κύριος kyrios “Lord”. This carried on into Latin where Dominus was used wherever the proper name of God was found in the original Hebrew, and “the LORD” in English translations (note the capitalization). Notably the Jerusalem Bible used “Yahweh” in it’s translation of the Hebrew Scriptures, and the use of the proper name of God has always struck many people as incongruous.

The books of the Hebrew Bible, in the collections now known as the Torah, the Prophets, and the Writings, were edited and mostly received their final forms in the centuries prior to Jesus. Not all books may have had a stable form even then – the Dead Sea Scrolls suggest that the lasts forty or so of the psalms had a variable order, and Jeremiah was circulating in two forms, one longer and one shorter (and it was the shorter one that was translated from Hebrew into the Greek Septuagint, while the longer one became the canonical Hebrew text). As this final formation was taking place the editors ensured that the texts described an ancient Israel not always as it was, but as they thought it should have been, or must have been.

Some aspects of this retroprojection included: a) the greater centralization of the worship of Israel at Jerusalem than was probably the case; b) an original monotheism that became corrupted by idols and the worship of other gods, whereas there was probably a high tolerance for the worship of Canaanite gods such as Baal and Asherah; and c) the giving of the full Torah at Sinai, with the full calendar of feasts, whereas much of this probably only emerged over centuries of fusion of the cult of Yahweh with agricultural festivals that probably pre-dated the coming of Israel to the land of Canaan.

Scholars suggest that initially Yahweh was simply the God of Israel, an ethnic God. Uniquely, Yahweh had no image, but as we know from 1 & 2 Kings, there were images of other gods in the Jerusalem Temple until Josiah had them removed and destroyed. But starting with Isaiah we begin to see not simply a special relationship between Israel and Yahweh, we also begin to see the claim that Yahweh’s claim was greater than just on this one, numerically small population. Isaiah 2.2-4 puts it this way:

In days to come the mountain of the Lord’s house shall be established as the highest of the mountains, and shall be raised above the hills; all the nations shall stream to it. 3Many peoples shall come and say, “Come, let us go up to the mountain of the Lord, to the house of the God of Jacob; that he may teach us his ways and that we may walk in his paths.” For out of Zion shall go forth instruction, and the word of the Lord from Jerusalem. 4He shall judge between the nations, and shall arbitrate for many peoples; they shall beat their swords into plowshares, and their spears into pruning hooks; nation shall not lift up sword against nation, neither shall they learn war any more.

Yahweh becomes in Isaiah’s vision a god for all peoples. There is now a universal quality to Yahvism.

The implication is that God now controls the fates of all nations. And so, in this day’s reading from the prophet, Assyria is an instrument of Yahweh, though they do not know it. And because they do not know Yahweh the God, he will punish the arrogance and haughtiness of Assyria. And, as we know, assyria was destroyed by the Neo-Babylonian Empire.

This exclusive monotheism with universal implications worked itself out in the extension of the gospel to the Gentiles (a word which simply means “the peoples” or “the nations”). We take this kind of universal claim as normal, but 2700 years ago it was novel and challenging.

Isaiah 10.5–19
Ah, Assyria, the rod of my anger—
the club in their hands is my fury! Against a godless nation I send him,
and against the people of my wrath I command him,to take spoil and seize plunder,
and to tread them down like the mire of the streets. But this is not what he intends,
nor does he have this in mind;but it is in his heart to destroy,
and to cut off nations not a few. For he says:‘Are not my commanders all kings? Is not Calno like Carchemish?
Is not Hamath like Arpad?
Is not Samaria like Damascus? As my hand has reached to the kingdoms of the idols
whose images were greater than those of Jerusalem and Samaria, shall I not do to Jerusalem and her idols
what I have done to Samaria and her images?’

When the Lord has finished all his work on Mount Zion and on Jerusalem, he will punish the arrogant boasting of the king of Assyria and his haughty pride. For he says:‘By the strength of my hand I have done it,
and by my wisdom, for I have understanding;I have removed the boundaries of peoples,
and have plundered their treasures;
like a bull I have brought down those who sat on thrones. My hand has found, like a nest,
the wealth of the peoples;and as one gathers eggs that have been forsaken,
so I have gathered all the earth;and there was none that moved a wing,
or opened its mouth, or chirped.’

Shall the axe vaunt itself over the one who wields it,
or the saw magnify itself against the one who handles it?As if a rod should raise the one who lifts it up,
or as if a staff should lift the one who is not wood! Therefore the Sovereign, the Lord of hosts,
will send wasting sickness among his stout warriors,and under his glory a burning will be kindled,
like the burning of fire. The light of Israel will become a fire,
and his Holy One a flame;and it will burn and devour
his thorns and briers in one day. The glory of his forest and his fruitful land
the Lord will destroy, both soul and body,
and it will be as when an invalid wastes away. The remnant of the trees of his forest will be so few
that a child can write them down.

2 Peter 2.17–22
These are waterless springs and mists driven by a storm; for them the deepest darkness has been reserved. For they speak bombastic nonsense, and with licentious desires of the flesh they entice people who have just escaped from those who live in error. They promise them freedom, but they themselves are slaves of corruption; for people are slaves to whatever masters them. For if, after they have escaped the defilements of the world through the knowledge of our Lord and Saviour Jesus Christ, they are again entangled in them and overpowered, the last state has become worse for them than the first. For it would have been better for them never to have known the way of righteousness than, after knowing it, to turn back from the holy commandment that was passed on to them. It has happened to them according to the true proverb,‘The dog turns back to its own vomit’,and,‘The sow is washed only to wallow in the mud.’

Matthew 11.2–15
When John heard in prison what the Messiah was doing, he sent word by his disciples and said to him, ‘Are you the one who is to come, or are we to wait for another?’ Jesus answered them, ‘Go and tell John what you hear and see: the blind receive their sight, the lame walk, the lepers are cleansed, the deaf hear, the dead are raised, and the poor have good news brought to them. And blessed is anyone who takes no offence at me.’

As they went away, Jesus began to speak to the crowds about John: ‘What did you go out into the wilderness to look at? A reed shaken by the wind? What then did you go out to see? Someone dressed in soft robes? Look, those who wear soft robes are in royal palaces. What then did you go out to see? A prophet? Yes, I tell you, and more than a prophet. This is the one about whom it is written,“See, I am sending my messenger ahead of you,
who will prepare your way before you.” Truly I tell you, among those born of women no one has arisen greater than John the Baptist; yet the least in the kingdom of heaven is greater than he. From the days of John the Baptist until now the kingdom of heaven has suffered violence, and the violent take it by force. For all the prophets and the law prophesied until John came; and if you are willing to accept it, he is Elijah who is to come. Let anyone with ears listen!

Canadian. Husband. Father. Christian. Recovering Settler. A priest of the Church of England, Diocese in Europe, on the island of Crete in Greece. More about me at https://www.linkedin.com/in/bruce-bryant-scott-4205501a/
View all posts by Bruce Bryant-Scott →
This entry was posted in Advent and tagged God's Name, Josiah, Yahvism. Bookmark the permalink.