Day Nine of an Advent Calendar: The Apocalypse as Justice

Posted on December 5, 2016 by Bruce Bryant-Scott 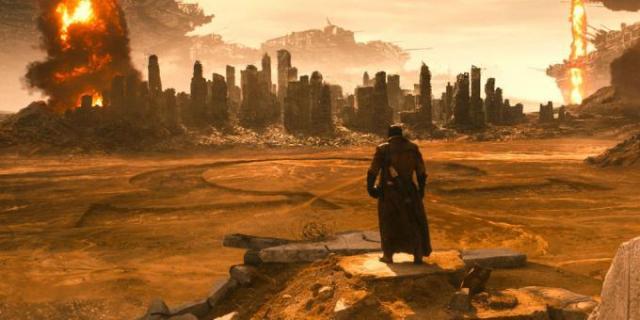 When you enter “Justice Apocalypse” as the search items in Google Image, you get Batman’s nightmare of a burning Gotham City.

When people hear the word “apocalypse” they usually understand it as this: “a disaster resulting in drastic, irreversible damage to human society or the environment, esp. on a global scale; a cataclysm” (OED 2008 Draft definition “b.”). So it doesn’t sound like a good thing.

However, to the first Christians the word ἀποκάλυψις simply meant “unveiling” or a “revealing”. The last book of the Bible in Greek is “Ho Apocalupsis” which is properly translated as “Revelation”. For these early readers an apocalypse is a good thing, because their “redemption is drawing near”, as the passage from Luke puts it.

This sounds surprising to us. Why would they want destruction to come upon the peoples of the world? Why would they accept “distress among the nations”? The answer is that they saw the world very differently from us. From the perspective of Paul, the Jews, or the early Gentile converts to Christianity, there was very little that was good about the rule of Rome and the culture of Gentiles. Rome was an imperial power that had no scruples about genocide, slavery, or sheer violence as means of achieving ends. Gentile worship of idols at best was foolish veneration of empty statues, but at worst it was a surrender to malevolent, demonic spirits. This led to corrupt morals, uncontrolled drunkenness, and preferring the cloak of darkness to the transparency of daylight. The “time of the Gentiles” was an evil time, and the sooner the end came the better.

This is why Paul’s mission to the Gentiles was so unusual – Jesus himself had said that he “was only sent to the lost sheep of Israel” (according to Matthew 15.24), but Paul claimed to have received a mission from God to take the good news to the unspeakable mass of Greeks, Romans, and barbarians. While we know that fairly soon there were more Gentile followers of Jesus than Jewish ones, Paul did not know that this would be the outcome. In his day the majority of Christians were still observant Jews (remember we are talking here of numbers probably at best of a few thousand Christians in the whole world, if that). His mission was the exception to the general expectation. It would have been unthinkable to Paul that a) the coming of the Son of Man would be delayed not just a few years but centuries, and that b) by about 300 AD possibly half of the population Roman Empire claimed to be Christian.

Today the followers of Jesus numbers some 2.2 billion, and make up 31.5% of the world’s population, thus being the largest religion on the planet. While Christianity in the West seems to be overwhelmed by agnosticism and the “spiritual but not religious”, in the rest of the world Christianity continues to grow, especially in Asia and Africa. As Vizzini would say, “Inconceivable!” For the early Christians the end of the world seemed a more likely outcome than the past twenty centuries of Christian history.

Where does this leave us with apocalypse? I think there are a few ways to go at it. One is to understand it literally, and basically say that Christ will come as the Son of Man in glory, and that there will be a judgment of the living and dead, which is great news for those of us who are faithful but not so good for those who are not. One can go further and say that it is thus the case that the Gospel will indeed be good news to those who are being oppressed and are suffering now, but bad news to those who are exploiting the poor and are callously indifferent to those not as fortunate as them.

Another way to approach this is to note that in the past sixty years we humans have been able to bring an apocalypse upon ourselves, either through nuclear war or global warming. God calls those of us who are Christians to warn people that there is time to change, to beat the swords into plowshares (as Isaiah puts it) and to learn to live in harmony with creation. The Apocalypse is now – the revealing of what will happen if we do not have a change of mind and repent of our ways. This is more social understanding of apocalyptic, less as a sure thing and more as a warning, like old time prophecy. Perhaps the exception that was granted in Christ to Gentile through the Pauline mission is now generalized as one that encompasses the whole of the world, not just a few.

Behind all of this is the demand for justice. The passage from Isaiah is a critique of those who accumulate wealth and then expend it in luxurious living. Isaiah predicts that this wealth will be destroyed by war, which is pretty much which happened in the generations after. In the same way Paul in Thessalonians and the author of Luke are critical of those who in their time ignore God and abhor justice (one leads to the other). The demand for justice from the oppressed and exploited of today is just as strong. In particular the indigenous peoples call into question the practices of those of us in the wealthy globalized world. Can we see apocalypse coming? Will we do what is necessary to avert it?

Isaiah 5.8–12, 18–23
Ah, you who join house to house,
who add field to field,until there is room for no one but you,
and you are left to live alone
in the midst of the land! The Lord of hosts has sworn in my hearing:Surely many houses shall be desolate,
large and beautiful houses, without inhabitant. For ten acres of vineyard shall yield but one bath,
and a homer of seed shall yield a mere ephah.

Ah, you who rise early in the morning
in pursuit of strong drink,who linger in the evening
to be inflamed by wine, whose feasts consist of lyre and harp,
tambourine and flute and wine,but who do not regard the deeds of the Lord,
or see the work of his hands! Ah, you who drag iniquity along with cords of falsehood,
who drag sin along as with cart-ropes, who say, ‘Let him make haste,
let him speed his work
that we may see it;let the plan of the Holy One of Israel hasten to fulfilment,
that we may know it!’ Ah, you who call evil good
and good evil,who put darkness for light
and light for darkness,who put bitter for sweet
and sweet for bitter! Ah, you who are wise in your own eyes,
and shrewd in your own sight! Ah, you who are heroes in drinking wine
and valiant at mixing drink, who acquit the guilty for a bribe,
and deprive the innocent of their rights!

1 Thessalonians 5.1–11
Now concerning the times and the seasons, brothers and sisters, you do not need to have anything written to you. For you yourselves know very well that the day of the Lord will come like a thief in the night. When they say, ‘There is peace and security’, then sudden destruction will come upon them, as labour pains come upon a pregnant woman, and there will be no escape! But you, beloved, are not in darkness, for that day to surprise you like a thief; for you are all children of light and children of the day; we are not of the night or of darkness. So then, let us not fall asleep as others do, but let us keep awake and be sober; for those who sleep sleep at night, and those who are drunk get drunk at night. But since we belong to the day, let us be sober, and put on the breastplate of faith and love, and for a helmet the hope of salvation. For God has destined us not for wrath but for obtaining salvation through our Lord Jesus Christ, who died for us, so that whether we are awake or asleep we may live with him. Therefore encourage one another and build up each other, as indeed you are doing.

Luke 21.20–28
[Jesus said] “When you see Jerusalem surrounded by armies, then know that its desolation has come near. Then those in Judea must flee to the mountains, and those inside the city must leave it, and those out in the country must not enter it; for these are days of vengeance, as a fulfilment of all that is written. Woe to those who are pregnant and to those who are nursing infants in those days! For there will be great distress on the earth and wrath against this people; they will fall by the edge of the sword and be taken away as captives among all nations; and Jerusalem will be trampled on by the Gentiles, until the times of the Gentiles are fulfilled.

“There will be signs in the sun, the moon, and the stars, and on the earth distress among nations confused by the roaring of the sea and the waves. People will faint from fear and foreboding of what is coming upon the world, for the powers of the heavens will be shaken. Then they will see “the Son of Man coming in a cloud” with power and great glory. Now when these things begin to take place, stand up and raise your heads, because your redemption is drawing near.”

Canadian. Husband. Father. Christian. Recovering Settler. A priest of the Church of England, Diocese in Europe, on the island of Crete in Greece. More about me at https://www.linkedin.com/in/bruce-bryant-scott-4205501a/
View all posts by Bruce Bryant-Scott →
This entry was posted in Advent and tagged Apocalypse, Justice. Bookmark the permalink.

1 Response to Day Nine of an Advent Calendar: The Apocalypse as Justice