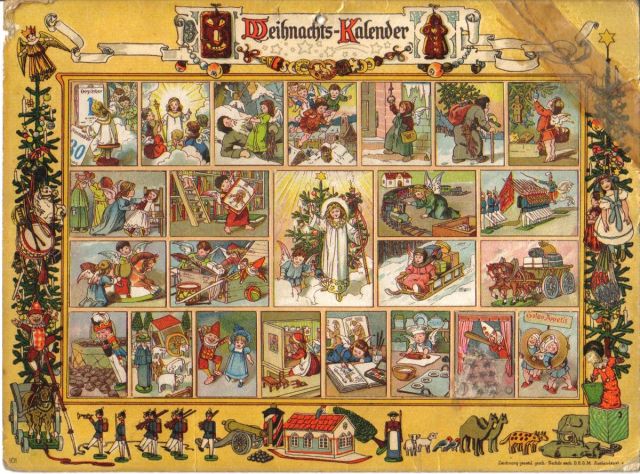 The tradition of the Advent Calendar goes back to German Lutherans of the 19th century. It was a fun way for children to mark the four Sundays of Advent and the days leading up to Christmas. In the post-war era the tradition has spread widely into other denominations, and thanks to commercialization, has become as disconnected from the religious origins as Santa Claus is from the birth of Jesus. Many children (and adults) will be  starting an Advent calendar on December 1 and counting down the days to Christmas, opening doors and seeing pretty pictures, or, more likely, finding and rapidly eating chocolate, or perhaps even finding  Star Wars Lego. For Christians Advent starts tomorrow (arguably this evening, at sunset) on its earliest possible date, November 27. Thus, we’ll have a full week following each Sunday, with Christmas itself coming seven days after the Fourth Sunday of Advent.

As some of you know I have been on a medical leave of absence for the past four weeks. While I am making progress, it will likely be a while before I am back to work. During my time off I have been unusually disciplined in my prayer life, becoming more deeply grounded in discursive, reflective, and contemplative forms of prayer. One of my practices is to say the Divine Offices of Morning and Evening Prayers. Part of that is the recitation of psalms, and part of that is also three readings from the Daily Office Lectionary (“DOL”). The First Sunday of Advent begins a new church year, and so tomorrow I flip from page 494 of the Book of Alternative Services to page 452, and start reading from the passages prescribed for Year 1; the DOL is on a two-year cycle, and in theory over two years almost alll of the Bible is read. There are three readings for each day – one from the Hebrew Scriptures or Old Testament, one from the non-gospel parts of the New Testament, and one from the four gospels. The readings are thematic, associated with the season. I usually read the first two in the morning, and save the gospel reading for the evening.

What I propose to do is write a short post each day during these four weeks of Advent commenting on one or more of the readings, a kind of lectio divina. The Lectionary is set up so that most of it is continuous reading from day to day. On Sundays the second and third readings are not in sequence with what what went before and follows in the week, but they do follow from Sunday to Sunday, on the theory that people might be attending Sunday evensong and might benefit from that continuity. There is one interruption in the lectionary for the major feast day of St. Andrew on November 30 (which, in the Anglican Church of Canada, is also the 40th anniversary of the ordination of women to the priesthood).

This may be my own Advent devotion of no interest to anyone else, but feel free to join in as I reflect on these passages from the Scriptures. God be with you as we prepare to remember the coming of Jesus, and may his first Advent be the reminder of our need to be ready for the second.

Canadian. Husband. Father. Christian. Recovering Settler. A priest of the Church of England, Diocese in Europe, on the island of Crete in Greece. More about me at https://www.linkedin.com/in/bruce-bryant-scott-4205501a/
View all posts by Bruce Bryant-Scott →
This entry was posted in Advent. Bookmark the permalink.