Not All Delegates are Alike

Posted on September 16, 2016 by Bruce Bryant-Scott 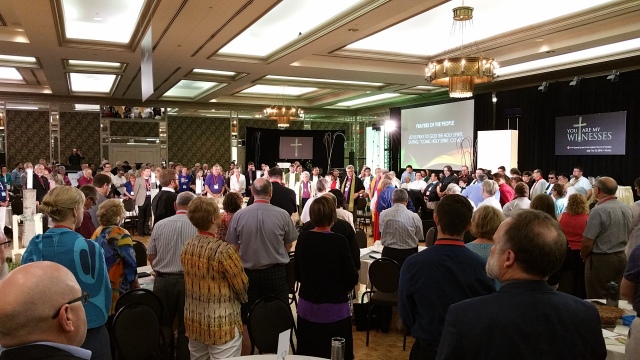 General Synod Delegates and the Populations They Represent

In the last blog post I reviewed the raw statistics collected by the General Synod in order to determine the number of clergy and lay delegates each diocese could send to General Synod. I also quoted the rules for that determination, so I won’t repeat it here.

The number of how we get the total delegates is a bit more complicated. First of all, every active bishop in the Anglican Church of Canada is a member of General Synod. Most dioceses have their “Ordinary” or diocesan bishop, but some have more than one. The Diocese of the Arctic have two bishops, as does the Diocese of Saskatchewan, and the Diocese of Toronto normally have five (one Diocesan and four “Area” bishops). Some dioceses had just elected co-adjutor bishops, such as Quebec. Also, the Bishop Ordinary of the Canadian Armed Forces is a member, as is the National Indigenous Anglican Bishop, and, of course, the Primate.

Second, each diocese sends a youth delegate. These are usually all non-ordained, and their votes get counted with the laity.

As well there are the two delegates from the religious orders, who may or may not be laity (this year they both were). The chancellor of General Synod and the General Secretary are ex officio with votes (the former is lay, the latter clergy). The Canadian Armed Forces also send two clergy, two laity, and a youth delegate (they function like a small diocese). Add in the delegates determined by the attendance figures and you get the grand total.

Well, you’ll be pleased to know I’ve crunched the numbers, and here are the results!

A few observations might be made here. First, obviously the large urban dioceses are underrepresented on the basis of “representation by population”. A vote by any member or delegate from Toronto stands for 1538 parishioners, whereas a vote by a delegate from the Anglican Parishes of the Central Interior has only 136 in attendance behind them.

Second, that’s OK. Our General Synod was not founded on a principle of absolute democracy, but on having the various stake holders present. Our system undoubtedly over-represents rural people and indigenous peoples. That’s all right – we need those voices at the table. We probably over-represent youth at General Synod, too, compared to the demographic reality of our attendance. So, too, do we include the voices of religious orders and those associated with the Canadian Forces.

Third, there are some really weird results when looking at attendance per delegate. The four dioceses with asterisks did not send any statistical information into the Office of the General Secretary, so God only knows what the real numbers are. I generously assumed the maximum in each case (4,999) and divided by the number of delegates – six for Mishamikoweesh, Quebec, Algoma, and five for Moosonee. This undoubtedly is too high for Moosonee and Quebec, and I really could not say if the number generated for Mishamikoweesh and Algoma bears any relation to reality.

Finally, in terms of attendance per delegate, Calgary is the closest to being the average diocese.

In the next blog I’m going to look at how the votes for the First Reading of the Amendment to the Marriage Canon relates to this.

Canadian. Husband. Father. Christian. Recovering Settler. A priest of the Church of England, Diocese in Europe, on the island of Crete in Greece. More about me at https://www.linkedin.com/in/bruce-bryant-scott-4205501a/
View all posts by Bruce Bryant-Scott →
This entry was posted in Anglican Church of Canada and tagged Anglican Church of Canada, General Synod 2016, Marriage Canon, Same-Sex Marriage. Bookmark the permalink.

1 Response to Not All Delegates are Alike