My grandfather, Beverley Scott, was part of the McGill Battery, Siege Artillery in the latter half of the Great War. He was at Vimy Ridge, and these are two pages from his diary. Click on the pictures to bring up a readable, full-size image.

The #7 (McGill) Siege Battery, in the Artillery of the Canadian Expeditionary Force (CEF) was formed April 25, 1916 16 from graduates and undergraduates of McGill University; Bev Scott was one of the latter. 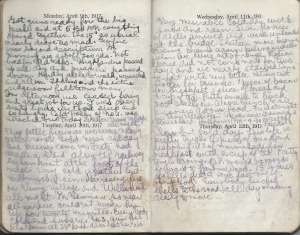 I visited Vimy Ridge in 1982. It was a very peaceful place, with a glorious monument. What struck me the most was how close the trenches were to each other.

Canadian. Husband. Father. Christian. Recovering Settler. A priest of the Church of England, Diocese in Europe, on the island of Crete in Greece. More about me at https://www.linkedin.com/in/bruce-bryant-scott-4205501a/
View all posts by Bruce Bryant-Scott →
This entry was posted in Uncategorized and tagged The Great War, Vimy Ridge. Bookmark the permalink.