The Island Parson: Not George Herbert

George Herbert (1593 – 1633) was a poet and priest of the Church of England. By all accounts he was a brilliant man. He came to maturity in the reign of James I, studied at Trinity College, Cambridge, and continued his academic career as a Fellow and Reader at Trinity, and then was appointed Public Orator in the University, a role in which he put to use his fluent knowledge of Latin and Greek. He looked to a career at court in diplomacy, and to further that possibility he served as a Member of parliament in 1625.

After the accession of Charles I his mind turned from matters of state to those of the church. In 1629 he was ordained a priest (he would have been a deacon since 1616 in order to teach at Cambridge) and moved to his only church position,  Fugglestone St Peter with St. Andrew’s, Bemerton just outside of Salisbury, Wiltshire. After just three years of ministry, he died of tuberculosis as the age of 39.

Herbert is known today for two works read by very different audiences. The more famous is a  book of poetry which was posthumously published as The Temple: Sacred Poems and Private Ejaculations in 1633. Repeatedly published, anthologised, studied in English classes, and set to music, his poetic works continue to resonate today. Profoundly religious, the works are studied by students religious and secular to discover the characteristics of his use of metre and language. TS Eliot wrote that Herbert is “a master of the simple everyday word in the right place, and charges it with concentrated meaning.” 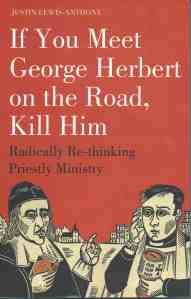 The other work is A Priest to the Temple, or The Country Parson, His Character and Rule of Life, published in 1652. The term parson (cognate with person)appears to go back to the 11th century, and referred to any clergy working in parishes that received an income. Its publication in Commonwealth England was a subversive action, as it looked to a generation earlier when the Church of England had the king as governor, the Book of Common Prayer, and the three-fold ministry of bishops, priests, and deacons. Under Cromwell there was no king, but merely a despotic Lord Protector, no Prayer Book, and arguments between Baptists and Presbyterians about what form the Church of England should take. It all ended in 1660 with the restoration of Charles II, and the return of the Prayer Book and the episcopal system of church governance. The High Church party within the C of E, closely allied with the royal court, promoted The Country Parson as the model of an effective and faithful church that owed nothing to the Puritans. Subsequent generations of Anglican clergy have turned The Country Parson to find a manual on how to be a faithful parish priest.

However, as Justin Lewis-Antony, a C of E vicar in Canterbury, has pointed out in his book If You Meet George Herbert on the Road, Kill Him there are some problems with Herbert’s vision of priestly ministry. The most profound is how idealistic it is. Herbert died young and never had to contend with the political crises that came shortly after in the Civil War. In addition to the endowed income of the parish he was independently wealthy, and not dependent upon the sacrificial giving of his parishioners. He only served for three years, and that in a parish of some 200 souls, with the aid of a curate. His description of the parson is someone who is bold and compassionate, highly educated yet capable of speaking simply to simple people, temperate and holy, full of prayer and admonishing the wayward, and correcting false doctrine and teaching obedience to the king. It is a projection of Herbert’s own excellent qualities that has stood as an unattainable ideal for 350 years as clergy have sought to translate The Country Parson to more complex times and more challenging situations. It is for this reason that Lewis-Antony named his book as he did – riffing off the old Buddhist maxim that “If you meet the Buddha on the road, kill him” because it is probably the case that your vision of the Buddha is a projection of your own fantastic prejudices than anything to do with the Enlightened One.

I spent much of my twenty-five years (so far) as a parish priest trying to live up to this ideal, always aware that I was never living up to it, no matter how successful others seemed to think I was. I also spent eight and a half years as an Executive Officer and Archdeacon in the Diocesan Office working closely with the Bishop, and encountering any number of ways that the model was falling apart. There are many good things in The Country Parson but it can no longer work, even historically, as a model for priestly ministry.

Lewis-Antony tries to radically re-think what priestly ministry is. He uses some lectures by Rowan Williams, who was Archbishop of Canterbury from 2002 to 2012, as his starting point, but I found it unsatisfying. Part of it is that I feel that any ordained ministry has to be integrally related to the ministry of all the baptised, and Lewis-Antony don’t seem to do that. He doesn’t go into how the three orders of bishop, priest, and deacon are supposed to work in coördination in servant leadership of the church. I also find that the death of Christendom is not as large a theme as it should be, a long lingering death that will have to give birth to a kind of church that looks quite unlike anything we’ve really seen. Lewis-Antony just isn’t radical enough.

I have begrudgingly begun to start calling myself post-modern, which is a fancy way of saying that I acknowledge the deconstruction/destruktion of old models of being church – baptised and ordained – and that I am seeking something new, ironically, by looking backwards past modernism, past the Enlightenment, the Reformation, the Middle Ages and late Antiquity, to the early centuries of Christianity, when little was settled, Christianity was marginalised, and laity were the anonymous evangelists.

I’ve now begun a new ministry in a 99-year-old parish – St. Matthias, in Victoria, British Columbia. It is a parish that suffered a schism some five years ago, and has slowly tried to come back. It was making some progress when another crisis hit it, and when the dust settled the rector had moved on and the parish was stuck in transition for over a year. Last Sunday we had 43 souls in church, including some six children. The parish leadership and those who attend are committed and faithful, but it is really too small to be financially sustainable. I laughingly tell my colleagues that I only have to triple the average Sunday attendance in the next couple of years and everything will be just fine, but I am well aware of how difficult this will be. And yet, I love being there – I really feel called to parish ministry, and I am having fun.

I am starting this blog, no so much as a parish blog as an attempt to publicly discuss what ministry, both lay and ordained, might look like today. I suspect it will be post-modern, post-Christendom, decolonizing (hard to be post-colonial when you’re the descendent of colonists who never left), humble, vulnerable, spiritual and religious, grounded in the old orthodox teachings framed by historical analysis, ethical, just, compassionate, bold, concerned with the oppressed and wounded, and . . . well, in short, to be like Jesus as described in the New Testament and proclaimed by twenty centuries of witnesses.  I hope you enjoy the ride.

Canadian. Husband. Father. Christian. Recovering Settler. A priest of the Church of England, Diocese in Europe, on the island of Crete in Greece. More about me at https://www.linkedin.com/in/bruce-bryant-scott-4205501a/
View all posts by Bruce Bryant-Scott →
This entry was posted in Uncategorized and tagged Anglican, Anglican Church of Canada, Church of England, Country Parson, George Herbert, Priest. Bookmark the permalink.

3 Responses to The Island Parson: Not George Herbert